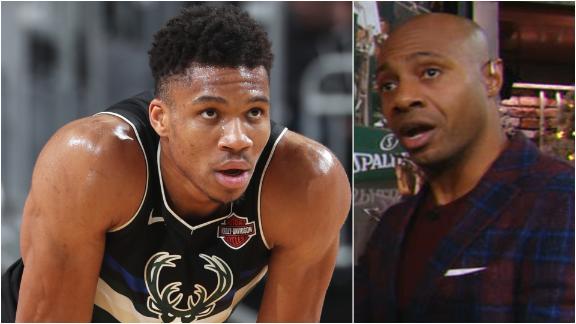 ESPN
Giannis Antetokounmpo and the Milwaukee Bucks saw an 18-game winning streak stopped Monday when they lost to the Dallas Mavericks.

Three nights later, Antetokounmpo and the Bucks shined on a national stage against the Los Angeles Lakers by doing enough to overcome big nights by LeBron James and Anthony Davis.

After beating the best team in the Western Conference, the Bucks face one of the worst teams in the league Saturday night when they visit the New York Knicks, who are playing their eighth game under interim coach Mike Miller.

Milwaukee rebounded from their 120-116 loss to the Mavericks by leading most of the way in a 111-104 win over the Lakers on Thursday. Antetokounmpo totaled 34 points, 11 rebounds and seven assists while making 11 of 19 shots and hitting a career-high five 3-pointers.

Antetokounmpo's latest big night was his 25th double-double and 17th game with at least 30 points, and it occurred after he scored 48 points on Monday.

"Our focus is to take it step by step, game by game, get better, improve as a team," Antetokounmpo said. "Our goal was to not lose two in a row, and that's what we did. It wasn't who we were playing, playing the Lakers, playing the Clippers, it doesn't really matter. We just look at ourselves. How can we improve?"

Antetokounmpo's dominance has helped the Bucks win nine of the last 10 meetings with the Knicks. The one loss was a 138-136 overtime defeat in New York on Dec. 1, 2018, when the Bucks blew a 16-point lead.

In Milwaukee's 132-88 home win on Dec. 2, former New York coach David Fizdale's penultimate game, Antetokounmpo totaled 29 and 15 rebounds. He has a double-double in his past six games against the Knicks, and the Bucks are 15-3 with him in the starting lineup against New York since 2013-14.

New York is 3-4 since Miller replaced the fired Fizdale on Dec. 6 and has been competitive in most games since the coaching change.

Friday was not one of those competitive nights, as the Knicks followed up an impressive 143-120 home win over the Atlanta Hawks on Tuesday with a dud in Miami, losing 129-114 to the Heat.

The Knicks are hoping to avoid another rough night after never leading and trailing by as many as 34 on Friday night when they allowed Miami to shoot 55.8 percent. It matched the first meeting with Milwaukee for New York's second-highest field-goal percentage allowed this season, only behind the 56.3 percent the Knicks allowed to Denver on Dec. 5 in Fizdale's final game.

Bobby Portis led the Knicks with 30 points on 12-of-17 shooting and immediately turned his focus toward Milwaukee, especially with a 44-point loss still fresh in his mind.

"It's kind of hard not to remember it." Portis, said of the previous meeting with Milwaukee "They whipped our tails that night. We let that hurt till midnight, and we got over it. I feel like we're a new team now. We're balanced. Everybody knows their role."

Regardless of roles, the Knicks are hoping rookie RJ Barrett resembles the player from Tuesday and not the one from Friday. Barrett scored a career-high 27 points against Atlanta but was held to two points on 1-of-10 shooting at Miami.