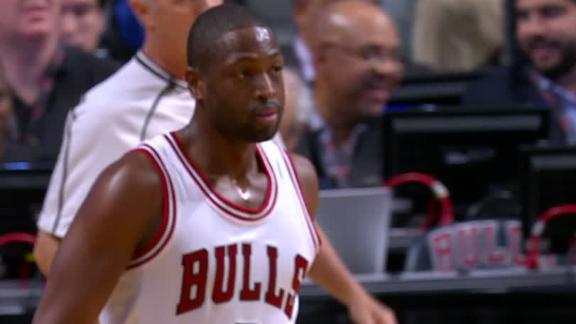 CHICAGO -- Dwyane Wade made his Chicago homecoming a memorable affair, contributing 22 points, six rebounds and five assists to the Bulls' 105-99 win over the Boston Celtics on Thursday night.

In his first regular-season appearance as a member of the Bulls, Wade had fans cheering from start to finish as he authored the beginning of a new chapter in his Hall of Fame career.

After being announced as "from Chicago" in the starting lineup introductions, Wade, who is from Robbins, Illinois, took a knee for a moment before making his way through a line of high-fives with some of his teammates.

"I've been waiting on that moment for a long time," Wade said. "I know it was special, obviously, for my family who was here. They've been waiting on it probably just as long. I just took that moment just to thank God for giving me this opportunity to be here, to do these things, to have this career I have. And to be able to make a decision on my own. And put myself in a position where I can live a dream out. I was very thankful in that moment. Took that knee to just thank the Lord and hear the cheers in the crowd and take in a moment. And then, it's game time."

Wade signed with the Bulls over the summer after 13 seasons with the Miami Heat. He has been heralded throughout training camp as a solid leader and a player his younger teammates can learn from, alongside veteran point guard Rajon Rondo.

Making his presence known throughout the game, Wade went 7-for-18 from the field and hit the biggest shot of the night, a 3-pointer with 26.3 seconds left that gave the Bulls a five-point lead they would not relinquish.

Wade said he "had an out-of-body experience" after knocking down the 3, which included a throat slash toward the Celtics.

"We're not the team that everyone is analytically putting together," Wade said of the new-look Bulls. "But we're a team of guys who can compete. We're a team of guys who have pride. We're a team of guys with talent. Once you make it all work together, it doesn't matter about analytics or the game. It's about players. And it's about going out there and competing. And we were able to do that tonight. So we're able to do that on a consistent basis. Who knows if the 3's going to go in, but we know if we compete and give that effort, we'll have a chance to win every night, and that's all you can ask for in this league."

Wade's performance underscored why the Bulls' front office was so happy to land him over the summer. Not only did he help lead Chicago to victory, but he also gave the team a jolt of energy throughout the night and made plays when the game was on the line.

"He means a lot to this team," Bulls power forward Taj Gibson said. "We need him to be the Wade he's always been. The guy who's not afraid to attack. The guy's who's not afraid to take big shots like you see late in the game. ... When D-Wade took that shot, he made it, his expressions, how he was jumping around, his swag -- it was kind of awkward, because I'm used to him kind of doing that against us on the opposing side. But it was a great thing. I was happy we got a win."

Butler, who the Bulls hope can mature under Wade's tutelage, sang his new teammate's praises as well.

"That's one less player I got to guard in this league, to tell you the truth, so I'm excited about that," Butler said of Wade. "But the way the game slows down for him, he knows where guys are going to be. It's hard to do, but that's what happens whenever you play 13, going on 14, years in this league. He's so much smarter than a lot of guys, using his body and his athleticism to his advantage, so I'm taking note."

Even Gabrielle Union, Wade's wife, couldn't believe what she was seeing in her husband's debut.

After watching Wade repeatedly knock down 3-pointers, Union took to Twitter to discuss her delight.

Wade shot just 7-for-44 from beyond the arc last season with the Heat, but he went 4-for-6 from 3-point range Thursday.

Told about his wife's tweet after the game, Wade started to chuckle.

"You got to keep the marriage spicy," Wade said. "You can't let it get too comfortable with something. So, trying to switch my game up after two years of marriage."

Wade might have been happiest of all after Thursday's win. It meant something special to him to be able to perform at such a high level in front of his friends and family.

"But I know deep inside this means a lot to them. Because this is where we grew up, watching a little 12-inch TV together, trying to watch the Bulls game on WGN. So I know this moment was incredible for them as well, and I enjoyed it. Because I know my loved ones, my family, we grew up idolizing and worshiping this organization and Michael Jordan and Scottie [Pippen] and the Bulls."

Wade leads Bulls to win over Celtics
In his first game with the Bulls, Dwyane Wade scores 22 points, including a game-clinching 3-pointer late in the fourth quarter as Chicago defeats the Boston Celtics 105-99.