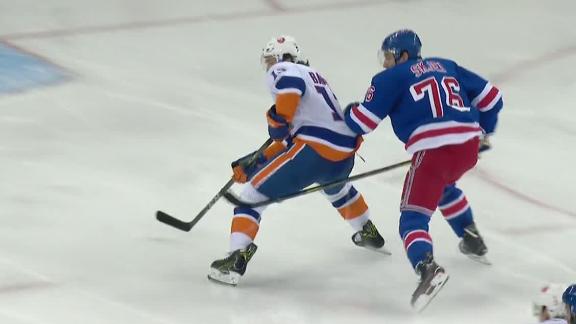 Morning Skate: Who will win the Calder Trophy this season?

Greg Wyshynski, senior writer: Maybe it's because I recently watched "I, Tonya," but I've been thinking about how the Calder Trophy race is one whose winner has both on-ice achievement and aesthetics. Where the top candidates not only have the numbers, but also the style points.

To that end: New York Islanders center Mathew Barzal is Nancy Kerrigan in this season's race. He's a Canadian kid with a junior hockey pedigree, so the judges already love him. He's a point-per-game player. I watched him tally his second five-point game of the season on Saturday, this time against the rivalNew York Rangers.He owns the highlight reel, scoring and creating goals with a flourish that other rookies in the competition simply don't have. Like Kerrigan, there are times when it seems like Barzal was created in a lab in a test tube labeled "CALDER WINNER."

And then we have Vancouver Canucks winger Brock Boeser. He's a Minnesota kid who played hockey at North Dakota. He doesn't have Barzal's points, but he's the only rookie to crack 20 goals this season, with 22 through Sunday. He also doesn't have Barzal's highlight reel, unless you have an affinity for wicked shots on goal. He plays in Vancouver rather than in the northeastern United States, which is the hockey media equivalent of sewing your own sequins on your competition outfit.

But here's why I put Tonya ... er ... Boeser ahead of Barzal right now: His 22 goals have come during a season in which his linemates were all sorts of injured: His center, Bo Horvat, hasn't played since Dec. 5. Boeser plays top-line minutes against top-line defenses -- there's no John Tavares to attract the opponents' top checking lines. He's on pace to have one of the best goal-scoring rookie seasons of the past decade, even if that pace has slowed just a tad.

At this point, Boeser would get my vote for the Calder. So please, Brock, no need for a Tonya/Nancy sabotage plot. Even if, you know, it would be totally expected behavior in hockey were it to happen on the ice.

The award usually goes to a precocious forward who puts up a bunch of points, foreshadowing a flashy career. Every once in a while, it goes to a goalie who stands on his head for his team. But defensemen? It's not just that it's harder to quantify success for D-men -- it is -- but it's also a position that requires more development. It's full of nuance and responsibility; defensemen just bloom later.

That's why what 20-year-old Charlie McAvoy is doing in Boston is so impressive.

McAvoy leads all rookies in ice time (22:51), and it's not really close. He skates with Zdeno Chara on the Bruins' top pairing, meaning he's assigned to the most dangerous lines in the league every night. And he's handling it with grace. Watch a Boston game and you'll see how smooth McAvoy is. He is rarely frazzled when he has the puck. He's able to deliver big hits. But more important, he's usually in the right spots.

He's also a big part of Boston's offense, tied for fifth on the team with 23 points (five goals, 18 assists). SinceVictor Hedman will miss the All-Star Game because of injury, McAvoy has a strong case to be the Atlantic Division's replacement. Heck, if NHL players were going to the Olympics this year, McAvoy would be a tough cut for Team USA.

McAvoy's importance to the Bruins cannot be understated. This is a team that is attempting to pull off a delicate balancing act: rebuilding while also somehow contending. McAvoy is the bridge between now and the future.

As NBC Sports Boston's Joe Haggerty pointed out, McAvoy played 45 games last year between Boston University, the AHL and his playoff cameo with the Bruins. It was the most games he'd ever played in a season. As this season passes the halfway mark, we'll see if McAvoy can keep pace. If he does, he unequivocally deserves this award.

Chris Peters: If the vote were today, I don't think there's any doubt who would be the top three vote-getters. McAvoy has a great case, especially as laid out by Emily. As worthy as he is, however, it's going to be hard for him to collect the necessary votes against a pair of forwards putting up the kind of numbers Boeser and Barzal are right now.

The debate between these guys could go back and forth for hours, and I'll be doing a deeper dive into the rookie race very soon. For some additional context on how special their seasons have been to this point -- with Barzal at 44 games played and Boeser at 42 -- their production at this point in the season has them in a pretty exclusive class. According to hockey-reference.com's Play Index,only three rookies have produced more points through their team's first 44 games or fewer since 2005-06: Alex Ovechkin (58), Sidney Crosby (49) and Evgeni Malkin (45). As Greg noted above, Barzal has 44 points and Boeser has 40.

Barzal has more raw points and he is a big reason his team is in the thick of the playoff race, which probably gives him an edge. But at this point, my first-place vote would go to Boeser. His 22 goals -- 16 of which have come at even strength, by the way -- in 42 games gives him a 0.52 goals-per-game average. That is the best rookie rate since Ovechkin's absurd 0.64 average in 2005-06.

Boeser is on pace to finish with 41 goals, which has been reached by only 16 rookies previously in the league's history (which excludes players who first played in the WHA before coming to the NHL). Only four rookies have reached the 40-goal mark since 1992-93: Teemu Selanne, Ovechkin, Eric Lindros and Auston Matthews. Additionally, Boeser leads his team in scoring by eight points and has nine more goals than any other teammate, while 31 of his 40 points came off a goal or primary assist, giving him two more primary points than Barzal in two fewer games.

No matter how you slice it, the three rookies mentioned on top of some potential late challengers makes for an especially compelling rookie race, and I am rather enjoying it.