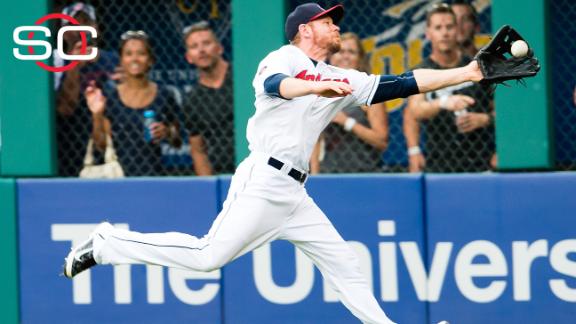 Moss was dealt Thursday to the St. Louis Cardinals, who were in the market for an outfielder after seven-time All-Star Matt Holliday re-injured his right quadriceps on Wednesday.

In exchange for Moss, who was in his first season with the Indians, the Indians received minor league pitcher Rob Kaminsky, a first-round pick in 2013.

Entering Wednesday, the Cardinals led the NL Central by 4 1/2 games over Pittsburgh. However, St. Louis is in an offensive funk and hasn't scored a run in 22 consecutive innings after being blanked 1-0 on Wednesday by the Cincinnati Reds.

And Holliday is out again with the same injury that sidelined him for 31 games earlier this season. The Cardinals will hope to get some pop from Moss, who signed a one-year, $6.5 million contract as a free agent with Cleveland during the offseason. While he did produce -- 15 homers, 50 RBI in 94 games -- the Indians have fallen back in the AL wild-card race and figure they would try to get something for the 31-year-old.

Moss didn't perform as the middle-of-the-order power hitter the Indians had hoped, and when he was informed of the trade, the slugger told general manager Chris Antonetti he wished he could have done more.

"We all know how much Brandon cares, how passionate he was, almost maybe at times too much and he wanted so desperately to be that force in the middle of the lineup that maybe it was difficult for him to do that," Antonetti said. "Now maybe with the change of opportunity and starting fresh with the Cardinals that he will get back to that hitter that we all know he is capable of being."

Following Cleveland's sixth straight loss on Monday night to Kansas City, Moss, who played four seasons in the NL with Philadelphia and Pittsburgh, expressed disappointment at seeing Murphy traded to the Los Angeles Angels and a season that hasn't gone well for the Indians.

"Nobody's happy. Nobody's enjoyed this season," Moss said. "It's just one of those things where, the more you try, the more adjustments you try to make, we're just not making them. Whether we try to make them, whether we go up there with a different approach, everything seems to fall apart."

Kaminsky is another strong arm for Cleveland's future.

The 20-year-old was selected with the No. 28 overall pick two years ago and was considered one of the top prospects in the Cardinals system.

Kaminsky has spent the entire season at Single-A Palm Beach, going 6-5 with a 2.09 ERA in 17 starts. He is currently leading the Florida State League in ERA and has 79 strikeouts in 94 2/3 innings.

"Rob is a guy who we have liked for quite a while out of the draft," Antonetti said. "He's a left-handed pitcher who has got a good fastball with good life to it, generates a lot of groundballs and has a really good compliment of secondary pitches. We think he has a good chance to develop into a solid major league pitcher.

Antonetti said the Indians will continue explore other deals before Friday's deadline.