Carmelo Anthony: 'Brilliant' and 'about time' for Michael Jordan to talk social issues 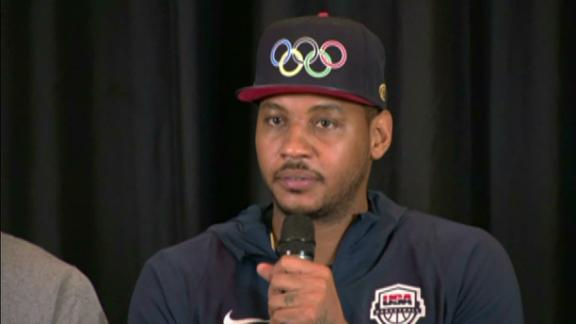 LOS ANGELES -- Carmelo Anthony praised Michael Jordan for speaking out Monday on the country's growing racial and social unrest while also saying it was "about time" Jordan stepped up and took a stance and "put his money where his mouth is at" with two grants of $1 million each to two organizations working to build trust between the police and their communities.

"I thought it was brilliant and about time that he stepped up and said what he said," Anthony said later Monday following a meeting with community leaders in Los Angeles. "At the end of the day, amongst us, he is our face. He is an African-American and a very powerful African-American, so for him to step up in the midst of these times right now, it was very big on his behalf. It's not always about the money, but for him to step up and put his money where his mouth is at, the timing was perfect."

On Monday, Anthony, along with Tamika Catchings and other members of the USA Basketball men's and women's national teams, met with community leaders at the Challengers Boys & Girls Club in Los Angeles for two hours in what was billed as "Leadership Together: A Conversation with Our Sons & Daughters." There were about 200 people in attendance, including Deputy Chief William Scott of the Los Angeles Police Department; Calvin Lyons, the president and CEO of the Boys & Girls Clubs of Metro Los Angeles; and Charisse Weaver, the president of the Brotherhood Crusade.

"We had a bunch of youth and a bunch of police officers and bunch of community leaders of all races and ethnicities, and it was an open forum and an open dialogue and an honest conversation," Anthony said. "We came together as one big group first and we discussed some things and then we broke down into eight small groups, and each group had athletes, officers and community leaders. We just talked about the issues that are going on out there today and we talked about solutions. Now there were a lot of solutions going on out there today but we know that nothing is going to happen overnight. But what we wanted to do was create something that we can start right now and continue when we leave here."

Anthony's vision for Monday's meeting in Los Angeles as well as opening the ESPYS earlier this month with LeBron James, Dwyane Wade and Chris Paul, with each of them urging their fellow athletes to be active socially, came to him in the middle of the night as he watched racial and social unrest unfolding on a daily basis on television.

"It started 3 o'clock in the morning one night after watching CNN all day and watching all the tragedies that were happening back to back to back," Anthony said. "It took me a while to get to that point because a lot of times when things happen like that, everybody quickly jumps on social media and everybody has an opinion. Nobody knows the facts and nobody knows what's going on. We're quick to say 'Black Lives Matter' without knowing both sides of the story. So I wanted to take my time. I wasn't going to say anything at first because I like to stay behind the scenes. I went to bed and I woke up in the middle of the night and I just started typing, and as I was typing, I spoke from the heart. The first thing that came to my mind was I have to get my fellow athletes to step up and use their voice and use their platform in the best way that they can. It went from an Instagram post to me getting [James, Wade and Paul] to open up the ESPYS, which was a big platform for us. ... We're just going to keep the conversation going."

On Sunday, the WNBA withdrew fines for teams and players who wore warm-up shirts in a show of support for citizens and police involved in recent shootings. Catchings, who is retiring at the end of the season and is the president of the players' union, said the issues affecting men today also affect women and stressed that it was important for all sides in the discussion to be educated.

"We've been able to stand up the last couple of weeks in what we've done with wearing the black shirts and being able to have a voice and use our platform," Catchings said. "Coming here and listening to the young men and women, we're all struggling and we're all hurting and feeling disrespected to a certain extent, but what comes out of today is being educated and being able to hear stories from the cop side and from the youth side."

Anthony's goal is that Monday's conversation will be the first of several that take place across the country over the next year with not only NBA and WNBA players but athletes in all sports and community leaders in their respective cities.

"There were some very, very powerful messages that were talked about amongst not just us as athletes but the youth. The youth really, really spoke out today about how they feel about their community and how they feel about police officers and how they feel about relationships and how we can mend these relationships. The police spoke, youth spoke and athletes spoke, and we really got a lot of messages out of today, so hopefully we can continue this dialogue, and I think we created something today that will continue on into the future."
Related topics:
sportsespntamika catchingswnbanew york knickscarmelo anthonymichael jordannbaespnw
Copyright © 2022 ESPN Internet Ventures. All rights reserved.
TOP STORIES
LIVE | Zeldin addresses supporters after winning GOP nomination
New York Primary Results
Witness: Trump grabbed steering wheel, demanded to go to Capitol
Mayor: Giuliani should be investigated for falsely reporting crime
Epstein associate Ghislaine Maxwell sentenced to 20 years in prison
AccuWeather: Warmer but still dry
Dozens of campaign workers owed thousands by candidate for NY governor
Show More
Classmates honor slain teen at high school graduation in NJ
FDA advisers recommend updated COVID booster shots for fall
Grandmother of Uvalde school shooter released from hospital
15 adults, teens treated for carbon monoxide exposure on Long Island
Navy SEAL Museum opens on Long Island
More TOP STORIES News