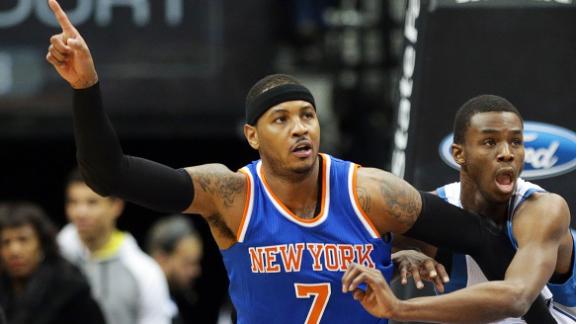 GREENBURGH, N.Y. -- As he heads to Chicago for the first time since picking the New York Knicks over the Bulls in free agency in July, Carmelo Anthony won't allow himself to think what if.

What if he had signed with the Bulls? How good would Chicago be with Anthony and Derrick Rose? How happy would Anthony be winning games -- and presumably winning a lot -- alongside coach Tom Thibodeau?

Anthony won't allow himself to entertain the notion of what could have been.

"If I start doing that and saying what if to myself and second-guessing and questioning myself, it won't be right," Anthony said after practice Wednesday as the Knicks prepare for Thursday night's game at Chicago. "For me, mentally it won't be right, so I will not allow myself to sway toward asking myself what if with this situation or that situation."

Anthony visited Chicago in July and came away thinking that he could have been a Bull. In an MSG Network documentary on his free agency, he said at one point that he thought he would sign with the Bulls and that it was a "perfect fit for me in Chicago."

He said he was thoroughly impressed with the organization and Thibodeau. But after also visiting the Los Angeles Lakers, Houston Rockets and Dallas Mavericks, Anthony opted to re-sign with the Knicks for $124 million over five years.

"What's done is done," Anthony said when asked about going to Chicago for the first time since his free-agent visit. "I kinda don't look at it. I kinda don't think about it anymore. That's in the past for me.

Anthony has not had the kind of results he had hoped for since making his big decision. The Knicks are off to a disastrous 5-22 start; the Bulls are 15-9, and Rose appears to be hitting his stride in his latest comeback from knee surgery.

The Knicks should have plenty of motivation entering Chicago. The Bulls drilled the Knicks 104-80 on opening night at Madison Square Garden in late October. And the Knicks are coming off a 107-87 home rout against the Mavericks in a game that saw coach Derek Fisher bench his starting five midway through the first quarter.

Anthony remains steadfast in his belief that he, Fisher and team president Phil Jackson will turn things around.

"You just gotta believe! You gotta believe," Anthony said when asked how he stays hopeful that things will get better. "I have never been a quitter in my life or in my career.

"If I don't stay the course now, if I don't believe and have faith in what we are trying to create in this whole journey, then I am fooling myself."

Anthony said he has thought about reinforcements potentially coming next season in free agency and the draft.

But then he tries to block that out and all the what-ifs and focus on turning around the Knicks now.

"I mean, you think about that," Anthony said of what Jackson can do in the summer. "It's only right that you think about that. But I don't try to put too much thought into what's going to happen when we still have almost 50 games or something like that left in this season.

"So for me to start thinking ahead of what the possibility is this offseason or next season, I just can't find myself to thinking like that during this time."