Carroll on Lynch: Hope it works out 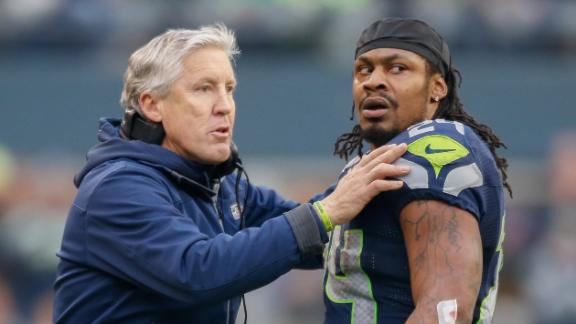 "We're always preparing for the future with him," Carroll told reporters Friday at the NFL scouting combine. "We've never thought of the future without him. Hopefully, it will work out."

Lynch's hesitancy to commit could have something to do with his contract situation. He's entering the final year of his contract, due to make $7 million. The two sides have been negotiating an extension for "a great deal of time now," according to Carroll, who said the Seahawks have made "big offers" to their leading rusher.

Carroll said he hasn't had direct contact with Lynch, who turns 29 in April.

The Seahawks don't seem concerned with the wear-and-tear factor. In the past four years, Lynch has 1,181 carries for 5,357 yards in the regular season, playing 63 games. That doesn't include eight playoff games over that span, with 164 more carries for 784 yards.

The ever-optimistic Carroll was in a typically upbeat mood almost three weeks after the crushing 28-24 loss to the New England Patriots in Super Bowl XLIX. He reflected on his controversial play call at the end of the game, saying he appreciates the public support from Bill Belichick. The Patriots coach recently blasted those who criticized Carroll's decision to attempt a pass at the goal line instead of handing the ball to Lynch from the 1-yard line.

"It is important," Carroll said of Belichick's opinion. "I care. We all care about that. Bill is an extraordinary coach. Anything he says, people should listen to. In this case, he's just respecting coaching. He understands the game. He knows what was going on exactly. He gets it."

Carroll acknowledged "there was a time needed for healing," but he claims to have moved on, hoping to use the adversity as something that can galvanize the team.

"The old adage about the thrill of victory and the agony of defeat, we just watched it," he said. "We just watched it over a 12-month period. It couldn't have been more obvious, and there are great lessons and great growth to come out of that.

"That's what's going on here. A team couldn't have been through more. This will make us extremely strong. Sometimes that's hard to see when it hurts, but that's OK. We'll make it through that. We'll hopefully be a powerful organization."