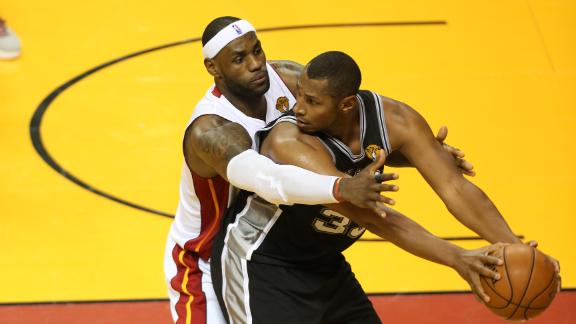 The Spurs are one win away from their fifth NBA championship, but Miami Heat center Chris Bosh said they won't be celebrating the clinching win in Game 5 Sunday night at San Antonio.

Asked if he was guaranteeing a victory, Bosh said: "I don't care about guarantees. We're just going to win the game."

The Spurs are the 32nd team in NBA history to hold a 3-1 lead in the Finals. All 31 of the previous teams have won the title.

On Saturday, LeBron James said there's no reason the two-time defending NBA champions can't make history by becoming the first to achieve such a feat.

"So history is made to be broken, and why not me be a part of it? That would be great. That would be a great storyline, right? But we'll see what happens. I've got to live in the moment, though, before we even get to that point."

San Antonio has taken command in stunning fashion by not just winning in Miami, but winning twice -- and in convincing fashion. The Spurs won Games 3 and 4 on the road by a combined 40 points, never trailing by more than two in either contest and running out to 25-point leads in each.

Urgency For Both Teams In Game 5
P.J. Carlesimo discusses the keys for both the Heat and the Spurs in Game 5 of the NBA Finals.