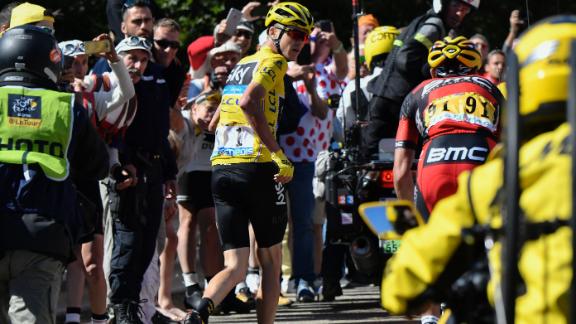 MONT VENTOUX, France -- Chris Froome was allowed to keep the yellow jersey after the Tour de France race jury ruled he lost his bike in unfair circumstances during a wacky conclusion to the 12th stage on Thursday.

In a complete embarrassment for race organizers on Bastille Day, Richie Porte crashed into a motorbike carrying a TV camera and Froome, who was following right behind his former teammate, also crashed in the final kilometer on the wind-shortened climb to Mont Ventoux.

Froome threw his bike aside and began running up the road. He eventually was given a small yellow race assistance bike before his team car was finally able to provide him with a suitable substitute.

"I told myself, I don't have a bike and my car is five minutes behind with another bike, it's too far away, I'm going to run a bit," Froome told French TV.

All of Froome's main rivals crossed ahead of him and Froome shook his head in disbelief when he finally reached the finish.

As Froome ran through the crowds he attempted to communicate with his team via radio but the crowds prevented the Team Sky car from reaching him.

"It was a nightmare," Sky sports director Nicolas Portal said. "It took up to two minutes for him to get a spare bike but the pedals did not suit him. ... I can't understand how so many people were allowed there. It was mayhem."

Froome did not come to the post-stage news conference.

Before the crash, Froome dropped most of his rivals apart from Porte and Bauke Mollema, and was likely going to add to his lead as he seeks a third title in four years.

"Decision by the commissaires panel: Chris Froome and Richie Porte have been given the same (stage) time as Bauke Mollema due to the incident in the finale. Froome retains the yellow jersey," the Tour website said.

Two-time runner-up Nairo Quintana was third, 54 seconds behind, and Mollema moved up to fourth, 56 seconds back.

Thomas De Gendt won the stage after getting into an early breakaway and easily sprinting past fellow Belgian Serge Pauwels on the steep slopes of Ventoux.

"There were too many people in the last kilometer," De Gendt said. "There was not even a place for one motorbike. They should do something about it."

With the wind at 125 kph (nearly 80 mph) on top of the "Giant of Provence," organizers moved the finish line six kilometers (3 1/2 miles) down the road to the Chalet Reynard.

The 178-kilometer (111-mile) leg began in Montpellier near the Mediterranean coast, passed by the 15th-century Chateau of Tarascon, and scaled the hilltop village of Gordes.

It was De Gendt's first career stage win in the Tour. He finished third in the 2012 Giro d'Italia.

Ventoux was also the site of an epic contest between Lance Armstrong and Marco Pantani in 2000, and where British rider Tom Simpson died in 1967 from a combination of amphetamines and alcohol.

Now, another memorable chapter has been added to Ventoux lore.