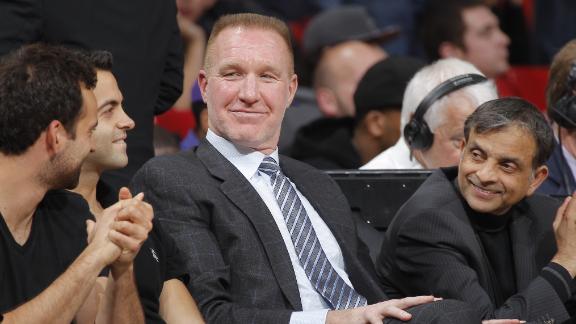 Chris Mullin is resisting the invitation to make an in-season move from an advisory role to the bench of the Sacramento Kings, according to NBA coaching sources.

Sources told ESPN.com that Kings owner Vivek Ranadive has spent much of the past 24 hours lobbying Mullin to replace the fired Mike Malone despite his lack of NBA coaching experience. But sources say Mullin has reservations about making such a leap in the middle of the season, without the benefit of training camp or the time to assemble a veteran-laden coaching staff like Steve Kerr has as a rookie head coach at Golden State.

Sources say that Mullin, in recent months, has expressed some interest to associates about trying his hand at coaching down the road. But if he can ultimately be persuaded to take the Kings job, sources say, chances are far greater that it would happen going into next season.

Mullin has been serving as a top adviser to Ranadive with the Kings since September 2013 and also works in close connection with Kings general manager Pete D'Alessandro, who worked under Mullin in Golden State.

Malone was fired Sunday in a move that sources say was more philosophy-based than performance-based, since the Kings are a respectable 11-13 in the Western Conference despite a 2-7 slide without ailing star center DeMarcus Cousins, who has been suffering from viral meningitis.

Sources told ESPN.com on Monday that the Kings are determined to give interim coach Ty Corbin "a shot" for the rest of the season to see if he can manufacture a more up-tempo style to suit the wishes of Ranadive and the Kings front office.

It remains to be seen how much time Corbin will actually get, given Ranadive's ambitious nature and the mixed reviews of Corbin's work in Utah as the successor to Jerry Sloan.

There was widespread belief around the league Monday, in the wake of Malone's dismissal, that the Kings would make a run at trying to hire ESPN analyst George Karl, who has been out of coaching since winning 57 games and NBA Coach of the Year honors in Denver in 2012-13. Sources said Tuesday that the Kings rate Karl highly, with D'Alessandro and Kings assistant general manager Mike Bratz having worked with him in Denver, but to this point they have yet to reach out to Karl and seem intent on giving Corbin his shot.

Karl, meanwhile, made it clear in an appearance Monday night on "NBA Tonight" that he's "ready to get back in the gym" and feels, at age 63, that he still has "one more rodeo left in me."