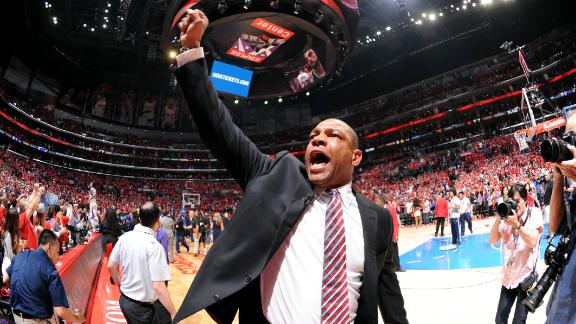 LOS ANGELES -- Clippers point guard Chris Paul suffered a left hamstring strain in Saturday's series-clinching win over the San Antonio Spurs and could be sidelined for Game 1 of the team's Western Conference semifinal series against the Houston Rockets on Monday.

"Yeah, yeah, very," Clippers coach Doc Rivers said when asked if he was concerned about Paul's injury. "Someone is going to have to step up. I was thinking it's funny how coaches think with three minutes left, I'm thinking, 'OK, if we win this game, thank God I signedLester [Hudson]because now you have two guards left.' We almost went big, and then we would literally have no other guards left. That was the first thing I thought.

"Chris may play or may not play the first game, but the game is Monday. My guess right now if I had to guess, I would say no, but I'm not sure."

Paul grabbed his left hamstring right before hitting a 3-pointer to give the Clippers a 23-22 lead with 2:11 remaining in the first quarter and exited 20 seconds later. He looked to be in tears as his head was buried in his hands while Clippers head athletic trainer Jasen Powell talked to him and sent him back to the locker room.

Paul returned in the second quarter but was limping noticeably throughout the game and occasionally grabbed his left hamstring. He finished with 27 points -- including the game-winning shot with 1 second left -- and six assists.

"Yeah, I'm going to get with our training staff," Paul said after the game. "I know my grandmother back in North Carolina is praying right now. She's praying, and she'll let my mom pray over it and all that, too, and it will be all right."

Paul, who turns 30 on Wednesday, averaged 19.1 points, 10.2 assists and 1.9 assists per game this season. This was the first time in his 10-year NBA career he started all 82 games during the regular season.