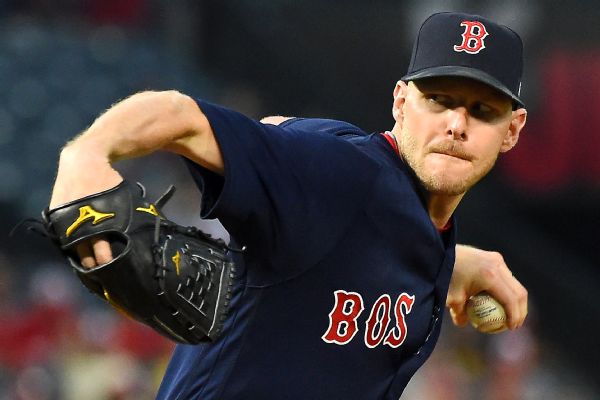 BOSTON -- Chris Sale shouldn't get too used to the extra rest the Boston Red Sox are giving him this week.

Not with three series coming up against the New York Yankees.

The Red Sox are being careful to monitor Sale's innings to keep him fresh for the stretch run. After a rainout Wednesday night, manager John Farrell said each of Boston's starters will be pushed back one day, meaning Sale won't face his former team, the Chicago White Sox, who opened a four-game series at Fenway Park on Thursday night. And because the Red Sox are idle Monday, Sale will get six days of rest before starting against the Tampa Bay Rays on Tuesday night at Tropicana Field.

But the lighter workload doesn't supersede a pennant race. Farrell said Sale would stay on his regular turn during the next few times through the rotation to assure that he started one game in each series against New York, including Aug. 13 at Yankee Stadium on ESPN's Sunday Night Baseball. He would then pitch against the Yankees again Aug. 19 at Fenway Park and on Sept. 3 at Yankee Stadium.

The Red Sox and Yankees are neck and neck in the American League East standings, with Boston holding a one-game lead entering play Thursday night.

"You look ahead, there's three series against New York," Farrell said. "Chris is mapped out to be in every one of them. You balance rest, but then you also look at how do you match up and align guys going forward? Thought the extra day was important for him [this week]."

Sale has dominated the Yankees throughout his career, posting a 1.17 ERA in 12 games (nine starts). He has faced them twice this season, giving up two earned runs and striking out 23 batters in 15 innings.

Sale is pacing the AL in ERA (2.70) and strikeouts (216), and is tied with Kansas City Royals lefty Jason Vargas for the league lead with 13 wins. But he also has thrown 153 innings, more than any pitcher in baseball. The Red Sox could have taken advantage of another day off on Aug. 10 to give Sale another extra day of rest, but that would have caused him to miss next weekend's series in New York.
Report a correction or typo
Related topics:
sportsespnjohn farrellscheduleboston red soxmlbseriesnew york yankeeschris saleplan
Copyright © 2022 ESPN Internet Ventures. All rights reserved.
TOP STORIES
Official admits police made 'wrong decision' in TX shooting
Texas survivor apologized to dad for blood on clothes, losing glasses
Massacre survivor says gunman told them: 'You're all gonna die'
16-year-old arrested after social media threat to shoot up NY school
Former Uvalde school teacher grieves for her mentor, students killed
Bank employees help kidnapped woman after she asks for loan
Summit on missing women and girls of color held in the Bronx
Show More
Bethpage Air Show cancels practice session
2 Long Island beaches close due to high bacteria levels
NYC officials, businesses hoping for post-pandemic summer of tourism
Jersey Shore, businesses prep for busy Memorial Day weekend
NYC beaches officially open to swimmers this Memorial Day weekend
More TOP STORIES News