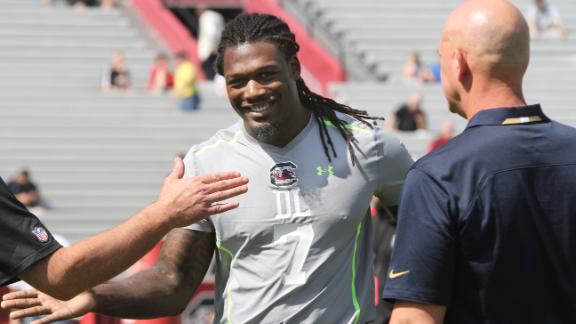 Potential top pick Jadeveon Clowney won't be participating in any more individual workouts before the NFL draft, apparently wary of a Brandon Thomas situation, according to TheMMQB.com.

Thomas, a former Clemson tackle, blew out his knee during a workout a couple weeks ago.

Clowney's agents have told a handful of teams that they can refer to the defensive end's efforts during his pro day on April 2.

As far as he is concerned, Clowney believes he should be the first overall pick.

"I can pretty much do it all," he said earlier this month. "Anything on defense I can help. I can be a playmaker. I am a playmaker. I've got what it takes, I believe, to go out there and set the tone for the next guy coming up. And to help my team out winning games.

"Every team I've ever played with, we've never had a losing season. Never. Before I got there, I watched them lose. Not just here. Back in high school, middle school. I was like, 'Man, that ain't going to be my team when I play on that team.'"

South Carolina never had won more than 10 games in a season before Clowney arrived. The Gamecocks were 11-2 in each of his three seasons. The Texans, who hold the top pick, are coming off a 2-14 season.

Information from ESPN.com's David Newton was used in this report.