Coach: Kaepernick has another gear 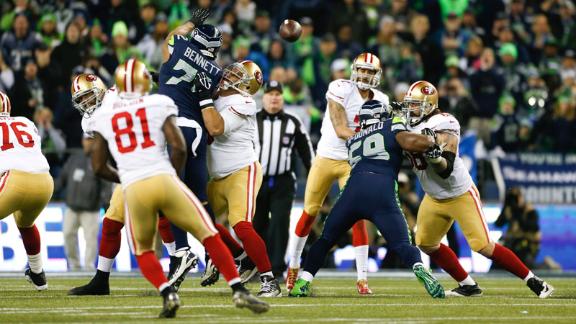 Colin Kaepernick already has a fairly stout NFL resume. But the way 49ers coach Jim Harbaugh sees it, the fourth-year quarterback is just getting started.

"I really expect that real breakout year for Colin," Harbaugh said after the team's second OTA session Wednesday. "He just has the look and feel that he's going to break out, more so than he already has. I'm really excited about everything about his game right now."

Kaepernick, a second-round draft choice out of Nevada in 2011, has taken San Francisco to back-to-back NFC title games and to its first Super Bowl since the 1994 season. This past season, the 49ers lost on the road to division rival and eventual Super Bowl champion Seattle.

To Harbaugh, however, Kaepernick's maturation in the 49ers' offense and the additions of receivers Stevie Johnson and Brandon Lloyd spell bigger and better things to come.

Where Harbaugh feels Kaepernick has "a stable of receivers ... for the first time ... since we've all been here together," the quarterback is taking a wait-and-see approach. At least for now.

"This is the time of the year where you can be vocal and you can work on things a lot more because you don't have to play Sunday," he said. "So if you want to experiment with things, if you want to try things out, now is the time to see if we can get something new that is going to work for our offense."

As the quarterback prepares to enter the final season of his rookie contract, Harbaugh remains hopeful the team will sign him to a long-term deal.

To Kaepernick, good things will come to those who wait.

"I'm letting my agents handle all of that," he said of the ongoing negotiations. "I'm out here trying to get better with my teammates. I'm playing football regardless."