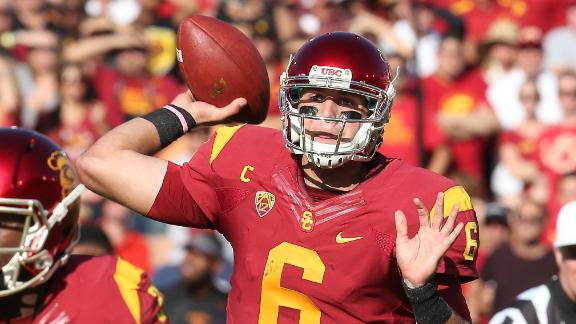 LOS ANGELES -- Cody Kessler spent two seasons watching Matt Barkley claim nearly every passing record atSouthern Californiaand in the Pac-12, soaking upevery bit of information he could and hoping he would get the chance one day to chase them down.

Kessler did that Saturday, throwing seven touchdown passes in the No. 22 Trojans' 56-28 victory overColoradoto break the school game record Barkleyset against the Buffaloes in 2011.

"It's an honor for me to break his record, but I'm thankful he set the bar so high and taught me as much as he did," said Kessler about Barkley, who he referred to as his "big brother."

Nelson Agholor caught three TD passes from Kessler, who passed the record on Steven Mitchell's diving 24-yard catch in the third quarter of a blowout victory for the Trojans (5-2, 4-1).

Coach Steve Sarkisian spent the week challenging Kessler to be more aggressive and revitalize a passing offense that in recent weeks looked too much like the reviled bubble screen-heavy scheme previously employed by Lane Kiffin.

Kessler responded by giving his receivers and tight ends chances to make plays down the field from the start, exploiting a vulnerable Colorado defense that seemed focused on limiting running back Javorius Allen instead.

Freshmen JuJu Smith and Bryce Dixon added scoring receptions from 7 and 15 yards out as Kessler went 11-of-14 for 159 yards and four touchdowns in the first quarter as USC raced to a 28-0 lead while much of the homecoming crowd was still filing in.

"We coach this guy harder than any other guy on our team, and he accepts it, and he comes to work every day with the mindset to get better," Sarkisian said.

With a 9-yard pass to Dixon late in the second quarter, Kessler became the third USC quarterback to throw five touchdown passes in the first half. Barkley did it on three occasions, while Mark Sanchez hit that mark in 2008.

Barkley had four six-TD games, also doing it against Colorado in the Buffaloes' last visit to the Coliseum in 2012.

Kessler also became the first Pac-12 quarterback to throw seven TD passes in the first three quarters, and the junior tied the conference record for TD passes in a non-overtime game.

Agholor added his third TD reception early in the third quarter, finishing with six catches for 128 yards. Smith had four receptions for 104 yards, and Allen added 128 yards rushing on 15 carries, scoring on a 39-yard run.

"When you are a team that believes in running the football, you have to make defenses pay for loading the box, you have to have the ability to throw the ball down the field. When you have those two things going for you, then life is good," Sarkisian said.

Life was anything but for Colorado (2-5, 0-4), which carried over none of the improvement from one score defeats in its past two Pac-12 games.

Sefo Liufau had 143 yards passing with two interceptions before being replaced on the final drive of the third quarter by Jordan Gehrke, and Nelson Spruce and Shay Fields each caught TD passes.

"We did a good job to keep fighting," Spruce said. "I don't think we ever gave in, but when you're spotting a team like that that many points it's going to be obviously tough."

Spruce was in no mood to enjoy the accomplishment, not with music booming from the USC locker room a few steps away. His focus was already on the next game.

Sarkisian, too, was in the same mindset, looking ahead to a key Pac-12 South game atUtahnext week, though he allowed himself some latitude forKessler's achievement.

"We'll enjoy it because a guy sets a school record for touchdown passes tonight, but, honestly, our minds are already on to Utah," Sarkisian said.