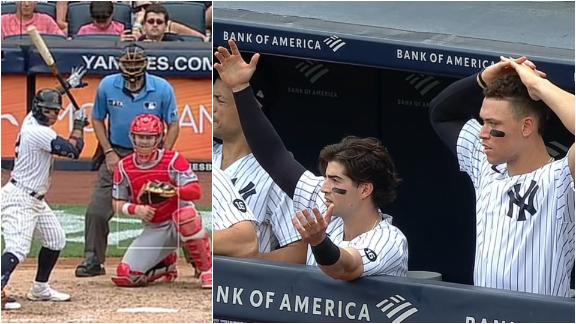 NEW YORK -- - Gerrit Cole struck out Josh Donaldson with the bases loaded to end the fifth inning and got through the sixth throwing shutout ball, and the New York Yankees beat the Minnesota Twins 7-1 Saturday for their season-high ninth straight win.

Giancarlo Stanton had a two-run double during a five-run fifth and Luke Voit remained red hot as the Yankees moved to 21-5 since dropping three of four at Boston in late July.


Bronx-raised Yankees infielder Andrew Velazquez hit his first career homer in the eighth inning, bringing his family in the stands to tears. The 27-year-old journeyman has been staying with his parents since being promoted from Triple-A on Aug. 9.

The series finale scheduled for Sunday was postponed after Saturday's game and rescheduled for Sept. 13 with Hurricane Henri set to hit the area. The Twins will have to interrupt a six-game homestand to return to New York for the makeup game.

Tyler Wade accounted for New York's first two runs by hitting an RBI single off Kenta Maeda (6-5) and scoring on a wild pitch with the bases loaded.

Cole (12-6) dominated in his second start since a bout with a mild symptoms of COVID-19. He allowed five hits and turned in his sixth scoreless outing this season, walking one and striking out six.

"I thought he was really good," manager Aaron Boone said. "All four pitches were in play for him."

The right-hander ran into trouble in the fifth by allowing one-out singles to Willians Astudillo and Andrelton Simmons and then a walk to Max Kepler.

After a visit from pitching coach Matt Blake, he punched out Jorge Polanco on a 99 mph fastball, then got Donaldson on a called third strike. Donaldson briefly questioned the call on the low changeup before heading to the dugout.

"I just made good pitches," Cole said. "I felt as if I was one step behind Kepler and tried to throw him a slide step not really for strikes, see if I could get him to chase. And then tried to get the leverage on Polanco and see if I could dictate the at-bat and once I did that, I got back to Donaldson and I executed some good pitches to him as well."

Donaldson pushed Cole into an unwanted spotlight earlier this season by calling out the Yankees ace by name when discussing pitchers he suspected of using illicit grip enhancers.

Cole struck out Donaldson twice in an outing days later and did the same Saturday.

"That's kind of the game right there," Boone said. "It was great to see him just in that big spot execute."

The Yankees won their second straight game by at least five runs after playing 13 of 14 decided by three runs or fewer.


Polanco homered for the Twins, who are 2-17 in their last 19 games at Yankee Stadium.

Maeda allowed five runs and four hits in 4 1/3 innings. He exited with right forearm tightness after throwing a 1-0 pitch to Stanton. After throwing his ninth straight pitch out of the strike zone, Maeda bent over, grimaced and was checked by a trainer before being replaced by Edgar García.

"He pitched pretty well up to that point," Minnesota manager Rocco Baldelli said. "I thought he had a good start going for himself."

Baldelli said Maeda was headed for further testing and once they get the results, they will decided if an IL stint is needed.

The Yankees took a 4-0 lead when Stanton lined a double to left and went up 6-0 on Voit's double to left after Aaron Judge was thrown out at the plate trying to score on a grounder by Rougned Odor.

Voit had two hits and two RBI a night after a four-hit game. The slugging first baseman recently made a public plea for more playing time amid a roster crunch created by three-time All-Star Anthony Rizzo's return from the COVID-19 injured list. Voit is batting .500 (13 for 26) with three homers and 13 RBI in his past seven starts.

Before homering, Velazquez said he heard from fans sitting behind the on-deck circle, imploring him to hit a ball down the right field line.

"I went 0 for 3 before that, so let me take his approach because mine ain't working," Velazquez said.

Velazquez flied out to center in his first two at-bats before striking out in the fifth. He got the milestone homer in his 129th career at-bat when he lifted a ball into the right field seats.

"That one was the best one by far," said Velazquez, who has 47 homers in 726 minor league games.

Velazquez said he was able to get the ball from the fan who caught it. He became the sixth New York-born player to homer for the Yankees since 1993.


"That's amazing," Stanton said. "I couldn't imagine what it's like for him to grow up here and obviously everybody that grows up here wants to do what he's doing right now. So it's a dream come true."

Odor nearly gave the Yankees a 9-0 lead when he appeared to homer over the right-center field fence. Odor's homer did not count because he called timeout.

Umpire Angel Hernandez walked away from home plate and frantically waved his arms, but Ralph Garza Jr. threw the pitch.

After manager Boone came out for a quick discussion, Odor struck out and briefly questioned Hernandez before returning to the dugout.

Twins: OF Byron Buxton (fractured left hand) went 0 for 2 in his first rehab game with Triple-A St. Paul on Friday and was scheduled for a recovery day.

Yankees: OF Brett Gardner was held out of the lineup after getting hit in the right elbow Friday and OF Estevan Florial was called up from Triple-A Scranton/Wilkes Barre. ... RHP Domingo Germán (right shoulder inflammation) will play catch early next week. He experienced soreness Thursday following a bullpen session Wednesday. ... RHP Luis Severino (right shoulder tightness) will meet with Dr. Neal ElAttrache in the middle of next week. A second opinion earlier this week did not find any structural damage.

The Twins will get two days off before opening a three-game series in Boston. The Yankees are set to open a two-game series at Atlanta on Monday night.