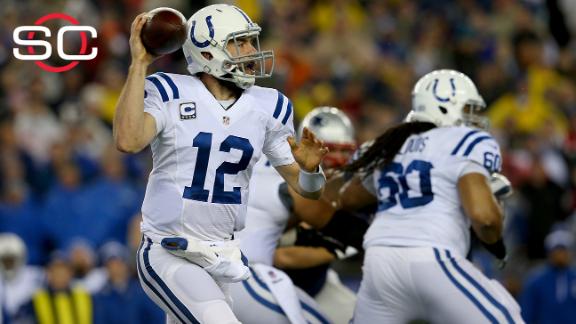 INDIANAPOLIS -- Miami Dolphins quarterback Ryan Tannehill's new $96 million contract has many wondering what Colts quarterback Andrew Luck, the premier player at that position from the 2012 draft class, will be paid once he gets his new contract.

The Dolphins quarterback is no better than the third-best quarterback in that 2012 class behind Luck and theSeattle Seahawks' Russell Wilson.

McAfee was being nice about Tannehill's record as a starting quarterback. Tannehill is actually 23-25 as a starter.

Tannehill signed a $96 million contract that includes $45 million in guarantees. He also will get $25 million guaranteed in the first three years, and his $77 million in new money makes him the sixth highest-paid quarterback in the NFL over the final four years, according to his agent, Pat Dye.

Luck, who has led the Colts a step further in the playoffs in each of his first three seasons, won't get a new contract until the end of next season at the earliest, according owner Jim Irsay. The Colts already have picked up Luck's fifth-year option.