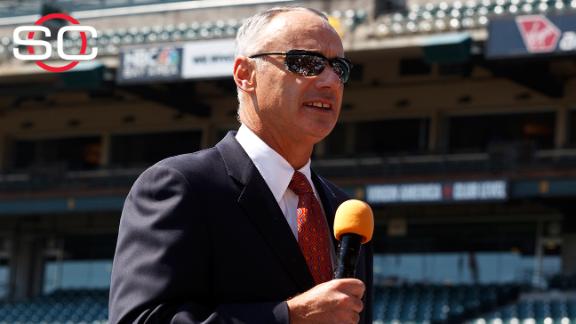 CINCINNATI -- Major League Baseball commissioner Rob Manfred shared a vision of the game Tuesday that could ultimately include more than 30 franchises.

Manfred, appearing at a Baseball Writers Association of America luncheon at the All-Star Game in Cincinnati, said he's open-minded about the possibility of MLB expanding for the first time since the Arizona Diamondbacks and Tampa Bay Rays came on board in 1998.

"Maybe one of the reasons I got this job is, I'm bullish on this game," Manfred said. "I think we are a growth business, broadly defined. And over an extended period of time, growth businesses look to get bigger. So yeah, I'm open to the idea that there will be a point in time where expansion may be possible."

Manfred said MLB has compiled a list of cities that might be viable options through expansion or possible relocation from existing markets. Tampa Bay and Oakland have been mentioned as markets that could eventually risk losing their teams if their ongoing stadium issues are not resolved.

Manfred said the league remains hopeful that the Rays andOakland Athleticswill be able to obtain new ballparks without relocating, yet will examine other markets in case a team needs to move or the sport decides to expand.

The sport intends to "examine their viability, think about what we can do to make them more viable, so that we have business alternatives that are available to us," Manfred said.

Montreal, in particular, has been vocal in its desire to land a team. The city's mayor, Denis Coderre, met with Manfred in New York in late May to begin a dialogue on the subject. Montreal showed its fervor for baseball by attracting 96,000 fans for two exhibition games between the Toronto Blue Jays and Cincinnati Reds in March. But Manfred has publicly stated that the city needs to build a new facility to replace Olympic Stadium, home of the Montreal Expos from 1977 through 2004.

"The mayor is an enthusiastic supporter of bringing baseball back to Montreal," Manfred said. "I happen to believe that Montreal has a great baseball history, which is a nice thing. And the market wildly supported two exhibition games in each of the last two years. Having said all that, it's a long ways from two exhibition games to 81 home games in a facility that is consistent with major league standards."

Manfred addressed a multitude of other questions in a 35-minute session with reporters. Among the issues he touched on:

Manfred said he was pleased with the results of the new Home Run Derby format, which featured eight players going head-to-head as a clock ticked down on the outfield scoreboard. Cincinnati's Todd Frazier beat the Dodgers' Joc Pederson in a stirring finale at Great American Ball Park on Monday night.

"The format changes were great, and the clock made a big difference in the event," Manfred said. "Being on the clock causes the players to swing. We had a dramatic increase in the number of home runs that were hit, in a dramatically shorter event. That's a great combination for the Home Run Derby."

Manfred does not anticipate any significant changes to All-Star fan balloting, despite a flurry of consternation about the American League roster being overrun with Kansas City Royals in May and June. Four Kansas City players made the AL starting lineup in fan balloting.

"Everybody started talking about eight Royals starters,"Manfred said. "At the time, I said publicly, 'Fans have a way of fixing these things.' I think you saw fans in places like Detroit, with Miguel Cabrera, and Houston, with Jose Altuve, where fans said, 'They had their say, but our guy is better.'

"That sort of fan reaction is a really good thing for our game, and it gives you confidence that fan voting is a good mechanism for engagement. Things also have a way of correcting themselves when they get out of whack."

Several weeks after a fan was struck by a broken bat and injured at Fenway Park, MLB continues to evaluate possible ways to increase fan safety at the ballpark. But Manfred said the sport won't consider introducing any new regulations until 2016 at the earliest.

"Obviously we had a very serious injury," Manfred said. "It concerns us. But making a major change to the game in a reactive mode, I believe, is a mistake. We set minimum standards, and obviously the clubs remain free to do what they want to do in their own ballparks."