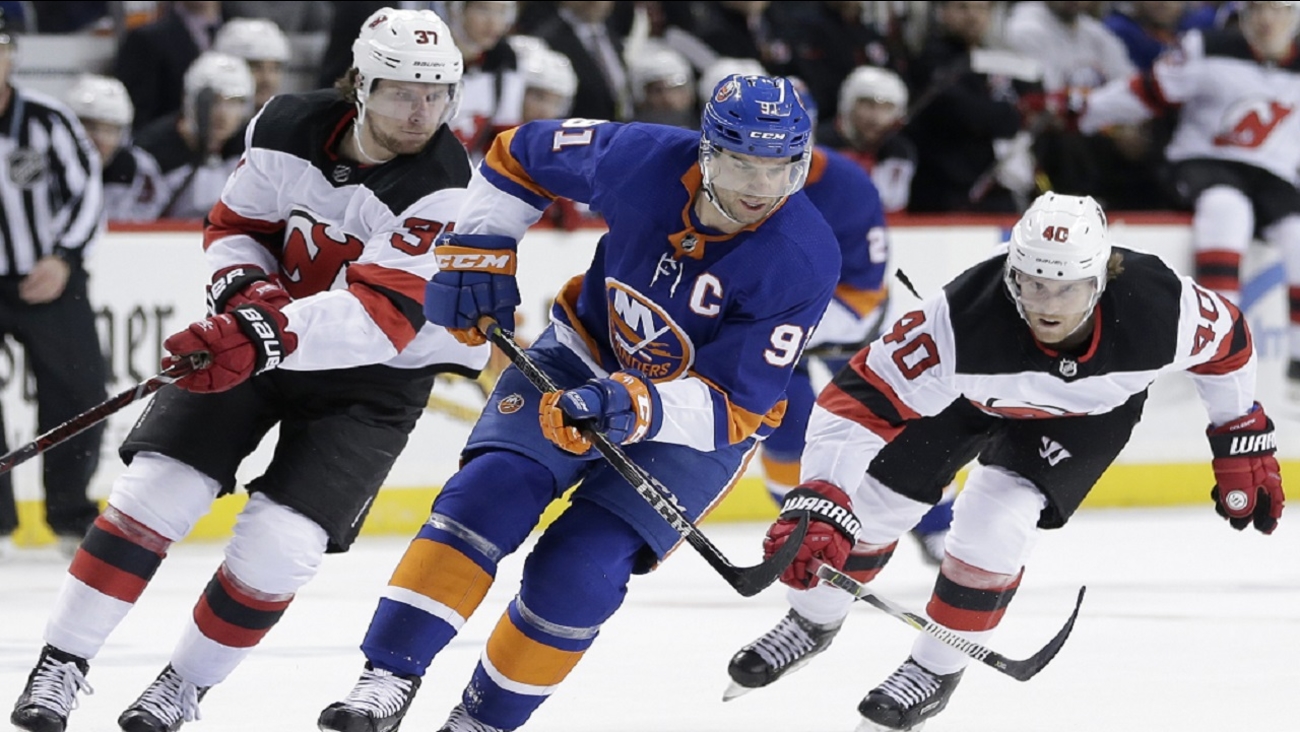 For the last few years, all three hockey teams in the Tri-State Area haven't captivated the excitement around here at the same time. The headlines have been reserved for the Rangers being the only constant playoff team since the 2010-2011 season.

But this season so far is somewhat different. What makes this season different? All three teams have had success and there's a possibility that they all could find themselves in the playoffs. As the calendar changes to this new year, it's also the time where hockey takes center stage. After the Super Bowl, and before the start of baseball it is the NHL's prime spot to grab the sports fans attention.

On Sunday hockey fans were treated to a back and forth game at Barclays Center in Brooklyn, between the New Jersey Devils and New York Islanders. This game needed to be decided in a shootout, with Brock Nelson netting the goal to give the Islanders a 5-4 win over the Devils in front of 15,146 fans.

New Jersey was up 4-2 at one point in this contest, but the Islanders Sebastian Aho scored on the powerplay in the third, then followed by Cal Clutterbuck's game tying goal with less than four minutes remaining. After the game, Clutterbuck said; "There was going to be some sort of adversity thrown at us, and it was going to be another test. Especially with a lot of key guys out of our lineup today ---- they had a full squad, that's a good team." Clutterbuck went on to say; "Made a couple mistakes, unfortunate breaks (blew a skate blade and broken stick) perseverance is the way you get out of these things."

The Rangers are coming off a hard fought win in Arizona on Saturday night, and face one of the great stories in the NHL this season, in the Vegas Golden Knights. The expansion team is second overall in the NHL with 58 points. Head coach Alain Vigneault had this to say about his opponent ahead of Sundays game; "They've got mobile defenseman, they've got real good goaltending, and they were able to get speed and skill up front." The Rangers head coach went on to say; "Give that organization full credit and full marks, they got their guys playing well. They're second in the league right now and this is going to be a real tough game for us."

As of Saturday, both the Rangers and Devils are in playoff position while the Islanders are not. But the Islanders are just 2 points out of a spot. Any consistent winning streak can put some separation between any team in the hunt right now. The Devils are in second place in the Metropolitan Division with 52 points, and the Rangers are in fourth with 49 points. The last time all 3 teams appeared in the playoffs at the same time was the 2006-07 season.
Report a correction or typo
Related topics:
sports
Copyright © 2022 WABC-TV. All Rights Reserved.
TOP STORIES
Man killed after being shot in chest aboard Q train at Canal Street
3 people killed in crash near catering hall on Long Island
Celebrate Israel Parade to kick off in NYC with heightened security
AccuWeather Alert: Still steamy
Buffalo mass shooting victims laid to rest one week after tragedy
Heat Advisory issued ahead of possible record-breaking temperatures
78,000 pounds of infant formula arrives in US
Show More
NJ police impose curfew after large party gets out of hand
Suspect breaks into NYC apartment, stabs man to death
Empire State Building lit to honor Notorious B.I.G.'s 50th birthday
Fate of 2,500 Ukrainian POWs from steel plant stirs concern
Biden pushes economic, security aims as he ends South Korea visit
More TOP STORIES News