Cowboys' Ezekiel Elliott on kettle hop: 'It's the perfect celebration' 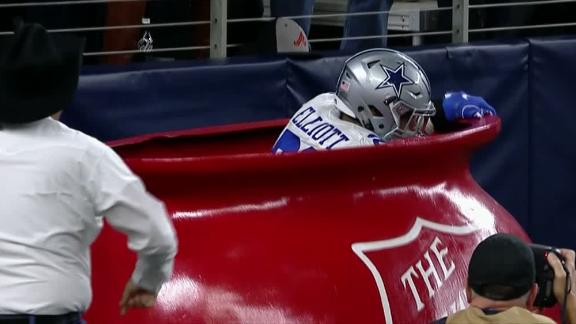 Neither will anybody else given how much it will be replayed in the future.

The Dallas Cowboys running back celebrated by jumping into an oversized Salvation Army red kettle in the end zone during the Cowboys' 26-20 win over the Tampa Bay Buccaneers, quickly hiding from everybody before popping out.

After conferring, the officials threw a flag for unsportsmanlike conduct, so Elliott didn't hide that much. But the NFL announced Monday morning that Elliott would not be fined for the celebration.

"I mean it's just sitting there right in the end zone, you know. It's the perfect celebration," Elliot said after the game. "They're one of our biggest partners, so I had to show them a little bit of love."

He tweeted Monday that he still planned to make a donation to the Salvation Army.

Elliott's score broke Tony Dorsett's team record for most touchdown runs by a rookie in Dallas history. The 2-yard run on third-and-goal gave the Cowboys a 10-3 lead in the second quarter.

If the Cowboys were upset with the penalty, they didn't show it. Management allowed the celebration to be shown on the center-hung digital board before the ensuing kickoff. They were made even happier after the Buccaneers' next drive started at their 22 and the Dallas defense forced the Bucs into a three-and-out.

"I think the Salvation Army should give him the highest award," Jones said after the game. "My dream would be for the NFL to really fine me a lot of money and I'll take them to the Supreme Court and we'll get the Salvation Army more attention than anybody can get them. So let's go."

Cowboys wide receiver Dez Bryant didn't see an issue with the celebration, saying "Why not let it be legal? We're just having fun. Let's not make it the No Fun League."

Asked if he would hop into the kettle again, Elliott said it was a one-time gesture.

"No, [Cowboys coach Jason Garrett] wasn't happy about it with the penalty for special teams," Elliott said. "Him or the special-teams coach wasn't happy, so I can't keep making them mad."

Garrett explained his reasoning for dampening the celebratory mood.

"You have to understand what's legal and what's not legal. You can jump into the stands in Green Bay, but you can't jump into a Salvation Army bucket in Dallas. You've got to be careful about snow angels. All of these different things that we do. So we have to be more mindful of that. I've got to coach that better."

Elliott celebrates TD by jumping into kettle in Cowboys' win
Ezekiel Elliott runs in his 13th rushing touchdown of the season, which sets a franchise rookie record. To celebrate, he runs over to a Salvation Army kettle and jumps in.