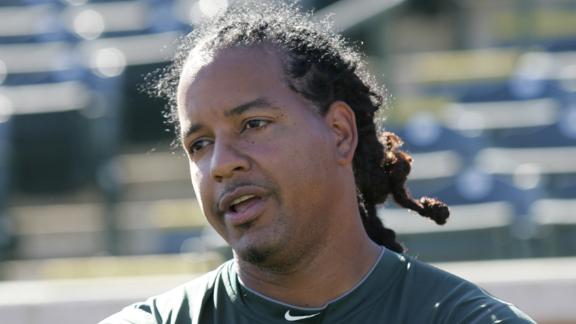 The Chicago Cubs often talk about doing the little things on a day-to-day basis to get "healthier" as an organization, and the team insists that bringing in slugger Manny Ramirez as a player-coach at Triple-A Iowa is just another step in that process.

"This is not a PR move at all," Cubs president Theo Epstein told reporters Sunday. "This is purely a baseball move, specifically a player-evelopment move."

The 41-year-old Ramirez, who has not played in the majors since a five-game stint with the Tampa Bay Rays in 2011, will take at-bats in extended spring training games at the Cubs' facility in Mesa, Arizona, before joining the Triple-A Iowa Cubs.

Ramirez played in Boston for several seasons under Epstein, and he was bitter after being traded to the Los Angeles Dodgers.

That has changed, Epstein said Sunday, as Ramirez has shown a desire to "give back and impact young people."

"He's extremely accountable," Epstein told reporters. "Right now, he's extremely honest, and he has a lot to offer in part because of what he went through. You never know in this world. But I think there's a potential high impact here.

A 12-time All-Star, Ramirez, who has 555 career home runs in 19 seasons, was suspended twice late in his career for testing positive for performance-enhancing substances.

Epstein made it clear Sunday that Ramirez "is not and will not" be on the Cubs' major league roster.

"Manny has made real mistakes in the past, but he has owned up to them and moved his life in a positive direction the last couple of years," Epstein said. "He is in a really great place right now and wants to share the lessons he's learned along the way. We think he deserves another chance and that our young hitters will benefit from it. ...

"He's going to be around some of our better prospects. It's important. But it's relatively low-risk as well. It's something that if it doesn't go well, we can terminate. But I think it will go well. I think Manny is doing this for the right reasons.''

Ramirez will be tasked with coaching some of the top offensive prospects in baseball, including infielder Javier Baez, who is batting just .203 with Iowa. The Cubs also have top outfield prospects Kris Bryant and Albert Almora in their minor league system.

"[Baez] has a tremendous opportunity to pick [Ramirez's] brain, see how he dealt with the expectations, performance anxiety, how he prepared. ... Not only Javy, but all of our players on that club. What a great opportunity for those guys to learn from him," Cubs scouting director Jason McLeod told ESPNChicago.com.

"I think [Baez] has a lot to garner from Manny in more ways than one: both first-round picks, both Latin players with English as a second language, both getting to the upper levels in quick fashion with a lot of expectations placed on them due to prior performance."

Jesse Rogers of ESPNChicago.com contributed to this report.