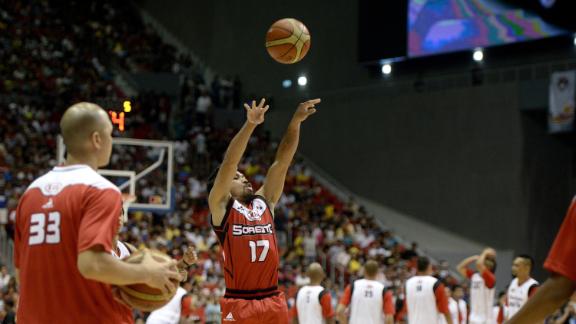 Former NBA player Daniel Orton learned a lesson that many boxers have been taught in the past: You may land a shot on Manny Pacquiao, but you'll likely lose eventually.

Orton, a 6-foot-10 center, was fined and released from the Purefoods Star Hotshots of the Philippine Basketball Association late last week after chiding Pacquiao's basketball ability after a game.

The 5-foot-6 Pacquiao, who has a May 2 fight scheduled against Floyd Mayweather and is also a congressman in the Philippines, has been a player-coach for the Kia Carnival this season and scored one point in the victory against the Hotshots.

"[Pacquiao playing] is a joke," said Orton, who was the Hotshots' designated foreign player. "... Professional boxer? Yeah. Congressman? All right. But professional basketball player? Seriously? It's a joke."

Orton, a 24-year-old Kentucky product who played for the NBA's Magic, Thunder and 76ers from 2011 to 2014, was ultimately let go by the Hotshots after just three games and then fined $5,650 for his comments.

"Everyone is angry at him," Hotshots top administrator Rene Pardo told Philippine reporters. "It is like he went to the United States and insulted the name of Martin Luther King."

Pacquiao has scored just one point in four games this season.

"This office disapproves of and frowns upon the cavalier manner in which Mr. Orton issued his comments and the unwarranted antics and liberties he has taken with the league and a fellow player," Salud's statement said. "This insulting behavior will never be condoned by the league."

Orton took to Twitter on Monday to thank the Purefoods Star Hotshots for his opportunity, albeit short, to play in the PBA.