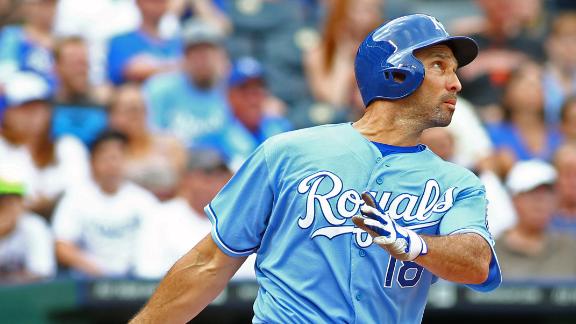 ST. PETERSBURG, Fla. -- Bench coach Dave Martinez and longtime major league playerRaul Ibanez are among eight candidates on the preliminary list the Tampa Bay Rays are considering for their next manager.

Ibanez was not on the Royals' active roster during the World Series. During the season, Ibanez, 42, hit .167 with five homers and 26 RBIs in 90 games. A source told ESPNNewYork.com's Andrew Marchand that Ibanez is also under consideration for the Yankees' vacant hitting-coach position.

Tampa Bay has been searching for a replacement for Joe Maddon since Oct. 24, when he opted out of the final year of his contract after leading the Rays to playoff berths four of the past seven seasons. Maddon was hired to manage the Chicago Cubs.

Martinez played 16 years in the majors for eight teams and was Tampa Bay's bench coach under Maddon for the past seven seasons. Ibanez's playing career spans 19 years, including stints with the Mariners, Angels, Phillies, Yankees and Royals.

Silverman said the list of candidates likely "will grow as we continue through this process."

"With a talented core of players and a strong clubhouse culture, our next manager will step into an enviable position,'' Silverman said. "We will look for him to build upon that and take us to the next level.''