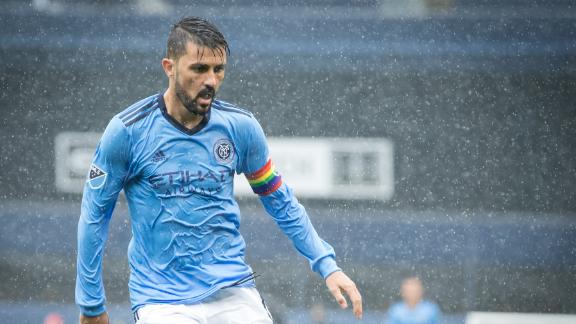 David Villa is not only loving life with Patrick Vieira's New York City FC but his outstanding Major League Soccer form has earned a dream Spain recall at the age of 35.

Three years ago eyebrows were raised at the news that the World Cup and European Championship winner would be leaving La Liga to become NYCFC's first player.

Villa was enticed by an "irresistible project" in the Big Apple and has not looked back since, with his outstanding displays making him favourite to win back-to-back MLS MVP awards.

The NYCFC forward has the league's single season scoring record in his sights having netted 19 goals this term -- form that has led to a Spain remarkable recall after three years.

Villa had all but given up hope on returning to the international fold, but the chance to play for his country again is a dream come true.

"It is difficult," Villa told Press Association Sport the day before this call-up. "I am always dreaming about the national team but it is difficult.

"Three years ago they didn't call me so it looks like it's difficult. But, you know, I always dream with putting on again the jersey of the national team and this has not changed in my mind."

Villa will link up with Julen Lopetegui's side for the World Cup qualifiers against Italy and Liechtenstein once the small matter of the New York derby is out of the way.

NYCFC face the New York Red Bulls on Friday evening in MLS, where the Spain striker has flourished rather than tapered off as the league progresses year-by-year.

"Of course we need time because it is only 21, 22 years old this league and the leagues in Europe is more than 100. We need a little bit of time but we are in the process and we are great."

NYCFC are enjoying a fine season, sitting second in the Eastern Conference and pushing hard for trophies under Vieira.

The former Arsenal, Manchester City and France midfielder freely admits he did not expect to be in such position, but is enjoying and succeeding in his role as head coach.

Villa knows a thing or two about working for great coaches and was part of Pep Guardiola's great Barcelona side.

The 35-year-old won titles galore there between 2010 and 2013, but life looks harder now in the wake of Neymar's world-record exit to Paris Saint-Germain.

"They are in the process and we only start the season, it is two or three games only officially so we have a lot of time in the future. "I expect that -- and I hope and I wish that -- they change their situation and Barcelona will be better again.

"I don't know what happened there. Neymar is a great player, now he is in PSG. It's bad for the supporters of Barcelona but you need to stay the same, strong."