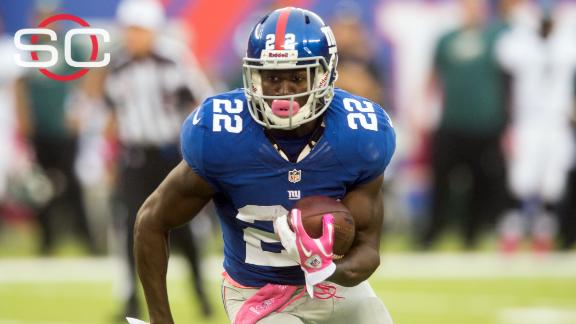 NEW YORK -- He is the sort of man who can be in your presence for only five minutes and make you feel like he's a walking, talking antidote to whatever bad day you might be having. David Wilson, the former New York Giants running back, not only has an unusual sports story. He also throws off this rare charisma, and it's not just because he's down-to-earth and disarmingly funny and bracingly smart. This is it, too: Wilson has a way of making you believe that even at 23, he has figured out some important things about what it takes to do the extraordinary.

When other people speak unabashedly about the having the sort of big dreams or worldview that he has -- Wilson calls it "life stuff" -- they can sound hokey or, even worse, rote. Not Wilson. If you want to know why he thinks he can go from the NFL to the 2016 Summer Games in 20-some months -- Wilson says, "This is the thought process: Why not? Why not?"

The last time most people saw Wilson in public, he was a second-year running back for the New York Giants. He was standing at a podium in August wearing a crisp suit and tie and a red boutonnire pinned on his lapel, and he was about to gain national attention for delivering one of wisest, most remarkably graceful forced-retirement speeches you'll ever see. Spinal stenosis had just abruptly ended Wilson's football career in just his second Giants training camp, despite neck surgery he had months earlier to repair the condition. Standing at the microphone, Wilson didn't break down and pull the pocket square out of his suit jacket to wipe away his tears until he began talking about leaving "my teammates. Great teammates. Teammates that are probably headed to the Hall of Fame someday, coaches that won the Super Bowl."

"But don't for a second do you all think that I'm pitying myself or sad," Wilson demanded, smiling even though he was still crying. "I got to live my dream. I'll set another dream, and I'll be great at that because I always look at trying to be great at whatever I do."

On Saturday -- just 10 months later, but true to his word -- Wilson will walk onto the track at New York Icahn Stadium to make his pro debut in the triple jump at the Adidas Grand Prix meet that has also attracted Olympic sprinting legend Usain Bolt and other best athletes in the sport. If his recently healed strained hamstring permits, Wilson will take his first step toward his crash-course attempt to qualify for the U.S. Nationals later this month and ultimately, the 2016 Summer Olympics in Rio de Janeiro.

By now it should be clear he is not the sort of man who thinks small. What makes Wilson all the more fascinating to follow is he hasn't competed in an official meet since he was sixth in the 2012 NCAA championships for Virginia Tech, and he happily admits, "I have no idea what to expect myself. But I'm excited." Wilson has been in full-time triple jump training only six months. He's based at the U.S. Olympic center near San Diego now, where he works out with 2012 Olympic silver medalist Willie Claye. He has trimmed down from his NFL playing weight of 210 pounds to 189. ("I don't know where the weight came from," Wilson said, laughing, "because when I was with the Giants, I had 7 percent body fat.")

Still, the other men he competes against are sparrows, by comparison, weighing between 145 to 170 pounds. Wilson says they kid him a lot about his raw technique, telling him, "You just muscled through that [jump]." Which is yet another reason he thinks he really can accomplish this Olympic dream. "I've never trained full time for track," he says. "There are still corrections I can make."

Wilson's five-year-old personal best of 16.20 meters (or 52 feet, 6 inches) would've placed him 10th in the final heat of the 2012 U.S. Olympic trials. That hasn't stopped him from setting a personal goal of 55 feet or better Saturday -- "I made a promise to my pops, for Father's Day," Wilson explains with a laugh. But that leap would still leave him far short of the 59-foot barrier that men he will be competing against this weekend have broken.

Wilson has a formidable gap to close and not much time before next summer's Olympic team trials to do it. And he knows that. But Wilson says this is no different than other times in his life when he's had people say to him, "Do you, uh, really think you can do that?" and he says he has only smiled back. Why? Because this is what he's learned about doing the extraordinary, too: It's not just what you say in front of people.

Success is forged all those days you're working and grinding and straining and sweating away from the crowd -- that's where you really become great and show your conviction. Events like the Olympics or an NFL game are just where you let everyone else see what you've been up to.

"I'm not saying things because I'm in front of cameras -- when I'm by myself, this is what I do and it's how I think," Wilson said Thursday, seated in a conference room chair at the Grand Hyatt in midtown Manhattan and looking ahead to Saturday's meet. "When I say words like, 'When I go to the Olympics' and 'Olympics, Olympics,' these are big words and goals that I set for myself. But I know the hard work that goes behind getting to those points. And not by any means am I saying it's going to be easy. ... I know I'm going to have to wake up every day and that be my main focus, same way I did for football. That's how I got successful at that."

Wilson is today more willing than he was at his goodbye news conference to talk at length about the sadness he feels about having his NFL career taken away. He remains remarkably free of bitterness or despair about how his NFL career was short-circuited after just 115 career carries, 504 yards and 21 games -- one of them a breakout day in which he set a Giants team record with 327 all-purpose yards, and inspired the same talk of potential that his friend Odell Beckham Jr., last season's NFL offensive rookie of the year for the Giants, created when he first arrived.

How often does he still think about football now? "Every day," Wilson quickly answers. What does he miss? His expression is wistful now. "I was in an interview the other day," he says, "and I used the analogy of missing football is like you being in love with a girl, and she breaks up with you. It's different if you didn't really want her anymore. Or, like, 'All right, I found somebody else and I'm breaking up with you.' But if she broke up with you, you're gonna think about that a little bit.

"Mostly daily, probably. '"What could have been with that girl?'"

Wilson says one of the big differences between football and track -- even track at the world-class level -- is, "When you win a game in football and you go in the locker room after, everyone is like, 'Hey, hey!' as a group. In a track and field event, other than the relays, it's like 'Hey, Coach. We did the jump.' Fist bump."

It's a poignant contrast to when Wilson was playing in NFL stadiums packed with 90,000 people and hearing that wall of sound rolling down when he broke a kick return, one of his specialties. He knows the millions he could've made. But he looks at it this way: If he can get to the Olympics, if he does someday find himself sprinting down the runway in the triple jump with 100,000 or so people watching him in Rio or some Summer Games beyond that, he can reasonably expect to feel the same adrenaline rush again and the same sense of fulfillment and pride he felt by making the NFL. He will have again done something great again. But now in two careers. Not one.

"I'm not saying the Olympics is going to be easy or smooth sailing," Wilson stresses. "But by saying it instead of 'Oh no, not me', you know what? By saying it, it's possible to reach. It's no different than as a young kid saying, 'I want to play in the NFL one day.' I was 8 years old. And I still remember the day I said it.' "

Wilson laughs now and breaks into a mischievous grin and asks, "What were the odds of that?"

But he already knows the answer. No longer than his odds of becoming an Olympian.