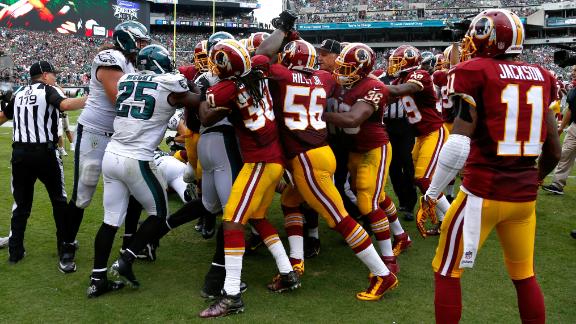 ASHBURN, Va. -- Washington Redskins cornerback DeAngelo Hall ruptured his left Achilles tendon and will miss the rest of the season -- but his optimism for the future increased after talking to Los Angeles Lakers star Kobe Bryant.

Hall suffered the injury in the third quarter of Sunday's 37-34 loss to the Philadelphia Eagles. An MRI on Monday confirmed the injury, but Hall maintained an upbeat demeanor while addressing reporters.

"One [injury] out of 11 years isn't a bad average," Hall said. "I'll take that in any situation. I've had so many coaches, the owner, Bruce [Allen], everybody consoling me like I'm dying. I'm like, 'Look y'all I'm not on suicide watch. I'll be all right. It could have been a whole lot worse.'

"I'm hearing Achilles [injuries] aren't the end of the world. Even if it is, it is what it is. But I feel good about it. I'm optimistic and I'm just ready to get to work."

Hall, who turns 31 in November, has been a durable player since entering the NFL in 2004. Sunday's game was the 70th straight he had played in, and he has appeared in 15 games in eight of his first 10 seasons.

Hall wants to play again, which is why he reached out to Bryant on Sunday night. The Lakers star suffered a similar injury near the end of the 2012-13 season.

"I talked to him a long time about it," said Hall, who met Bryant at a charity function in Washington, D.C., several years ago. "He said the same thing our trainers said, which is just to be patient with it. It will feel like you can push and feel like you can do some things, but the best thing for that is just to not do anything. Be as patient as possible with it.

"This being injured thing is new for me. I'll heed the advice of all these people and I'll listen to them and I'll come back better."

Hall is signed through 2017 and will count $4.8 million against the salary cap next year. The Redskins, however, would save $2.375 million if they don't feel he can return and subsequently release him.

The Redskins are expected to sign corner Chase Minnifield off the practice squad to replace Hall, who also was the defensive captain.

"It sucks," Redskins linebacker Brian Orakpo said of Hall's injury. "We lost a leader in our locker room. It's a huge loss for us."

Eagles Win Brawl-Marred Game
Nick Foles threw for 325 yards and three touchdowns and Chris Baker and Jason Peters were ejected in the Eagles' 37-34 win over the Redskins.