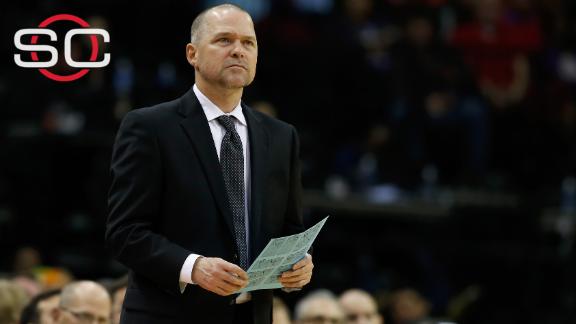 Mike Malone has been hired as the new coach of the Denver Nuggetsin a deal sources told ESPN's Brian Windhorst is for three years with a fourth-year team option.

Malone, who went 39-67 over parts of two seasons after theSacramento Kingshired himfollowing the 2013 season,was the lone candidate to interview twice for the Nuggets.

He replaces Melvin Hunt, who took over on an interim basis for Brian Shaw, who was fired in early March. Besides Hunt, Mike D'Antoni -- the former coach of the Phoenix Suns, New York Knicks,Los Angeles Lakersand briefly the Nuggets -- also was a candidate for the position.

Malone is a veteran NBA assistant who made stops with the Knicks,Cleveland Cavaliers, New Orleans Hornets and Golden State Warriorsbefore being hired as coach in Sacramento. He was fired on Dec. 14 after the Kings started this season 11-13.

When Shaw arrived in town in June 2013, he brought with him a slow-it-down, deliberate pace that was supposedly going to get the Nuggets further in the playoffs. But they didn't even go to the postseason, missing out the past two years. This after making the playoffs for 10 consecutive years, mostlyunder the direction of George Karl and his up-tempo system.

The front office preached a return to running. That's why D'Antoni was considered a top candidate for the position, along with Hunt, who steadied a team that had soured on Shaw.

Hunt's players even lobbied for the team to hire him. But they're receptive to Malone.

"Don't know him as a coach. I can't wait to talk to him," forward Danilo Gallinari said in an email to The Associated Press.

The Kings went 28-54 in Malone's first season and missed the playoffs for an eighth straight year. They got off to a better start in 2014-15, winning nine of their first 14 games. Soon after, they went into a tailspin after All-Star center DeMarcus Cousins was sidelined by viral meningitis. Malone was fired 24 games into the season.

Malone, however, earned the respect of Cousins and got the big man to buy into his system.

The Nuggets are hoping for a similar situation in the Mile High City, especially after Shaw lost the locker room. It got so toxic that players were overheard chanting "1-2-3 ... six weeks," which was interpreted by some as a countdown to the end of a dismal season and was uttered just before Shaw was fired.

At the end of the season, GM Tim Connelly talked about wanting the team's next head coach to have more of a running philosophy, as when Karl was in charge.

Malone does have experience with that type of system since he was an assistant coach for the Warriors before Mark Jackson was replaced by Steve Kerr.

Marc Stein of ESPN.com and The Associated Press contributed to this report.