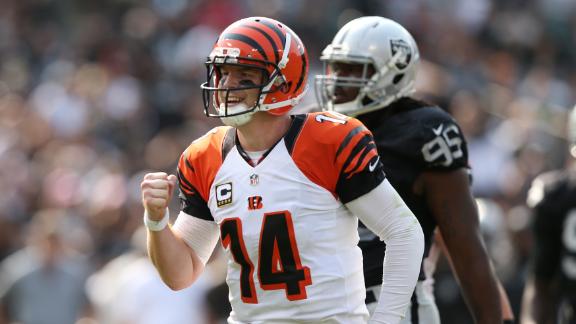 The Oakland Raiders were encouraged enough by an MRI of quarterback Derek Carr's hand that they do not intend to bring Christian Ponder in as a backup option this week, team sources told ESPN's Chris Mortensen.

It remains to be seen whether Carr will be healthy enough to start against the Baltimore Ravens.

Earlier, sources said the Raiders were not expecting Carr to play this week and called Ponder, who was a surprising cut from the team's 53-man roster as it retained just two quarterbacks.

Ponder will remain on hold as a free agent. Citing family reasons, he turned down a chance to work out for the Philadelphia Eagles on Tuesday, sources said.

A 2014 second-round pick, Carr was the only rookie quarterback to start every game last season. He completed 7 of 12 passes for 61 yards Sunday. The Bengals led 10-0 when he left the game.

In other Oakland injury news, the Raiders fear safety Nate Allen has torn his ACL, and he will undergo more testing Monday. Starting safety Charles Woodson is scheduled for an MRI after injuring his shoulder Sunday.