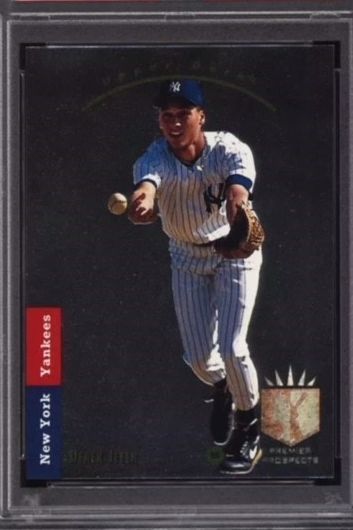 ESPN
By Darren Rovell
A Derek Jeter rookie card has sold for $99,100, the highest price ever paid for a modern-day baseball card.

Brent Huigens, CEO of PWCC, which conducted the eBay auction, confirmed to ESPN on Friday that winning bidder Adrian Proietti had paid the company for the card.

Proietti said the purchase rounds out his obsession for the set, a 1993 Upper Deck SP, that began 25 years ago. Back then, Proietti said he was looking for the Don Mattingly card, but when he got back into the game 10 years ago, he started buying boxes of the set to try to get the Derek Jeter rookie card out of the packs.

He got more than 20 Jeters, but could never get the one that would grade out as a perfect 10 from the premiere hobby card grader, PSA/DNA.

The fact that it's a foil card makes it especially challenging.

"People have a much harder time understanding the nuance in the grading of modern-day cards," Huigens said. "There isn't the same difference from an 8 to a 9 to a 10 in modern cards as there is with vintage."

Huigens said he believes collectors will soon start to realize the premiums being paid for the best grade of modern-day cards as they have with the old stuff. A modern-day card is anything from 1986 or later.

Proietti paid nearly double the previous record for the card, which was $54,576, set just a week before Proeitti agreed to buy his. He said he paid a premium since the auction was conducted by PWCC, which will sell more baseball cards than anyone on eBay in 2018.