Derrick Rose charged up in postseason return: 'It felt good' 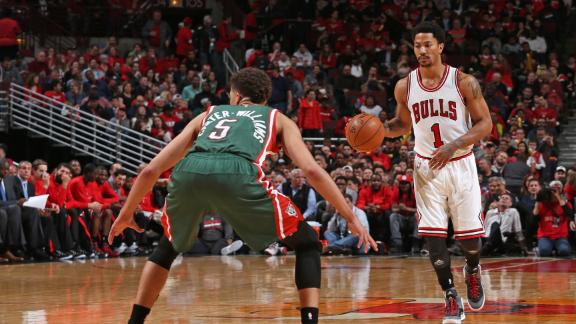 CHICAGO -- In his first postseason game in almost three years, Chicago Bulls point guard Derrick Rosescored 23 points and dished out seven assists while showing more emotion than usual in a 103-91 win over the Milwaukee Bucks in Game 1 of the Eastern Conference quarterfinals Saturday night.


"It felt good," Rose said of his playoff return. "It felt normal. I'm grateful to be playing again, playing with my teammates that I have right now. They're allowing me to play the way that I normally play, and it's an honor, man. I'm really fortunate because I think anywhere else it wouldn't be the same, and they're giving me motivation. They're pushing me, and it feels good."


After an unremarkable six minutes in the first quarter, Rose went 5-for-5 from the field in the second -- dominating the game at times. It was Rose's first playoff action since April 28, 2012, in Game 1 of the Eastern Conference first round against the Philadelphia 76ers. Rose tore the ACL in his left knee that day and has struggled to stay on the floor since. He tore the medial meniscus in his right knee in November 2013 and had a mensicectomy in February 2015 after tearing it again.


It was clear that his teammates enjoyed having him back in the playoff spotlight.

"I think it was special to all of us," Bulls center Joakim Noah said. "Derrick played really well, and I could just tell before the game he was just -- it was like more for the love of the game, you know? It was just good to see him out there competing the way he was competing. It felt really good."


Noah and his teammates appreciated what Rose's presence meant to everybody. They knew that he was spacing the floor for everyone else, and they could sense how happy he was to be back on the court after such a long big-game absence. Rose thrived off the cheers from the crowd -- waving his arms up and down at one point for them to make more noise. The fans responded throughout the night by showering Rose with "M-V-P" chants.


"I love it," Bulls forward Taj Gibson said of having Rose back in a playoff atmosphere. "I love it. We haven't had him in the playoffs with us for a while now. It just feels so good just to have one of our scorers, one of our leaders back. It was a great feeling to see him come out, take over at times, be aggressive."


"It's exciting," Butler said. "He makes everything easier for everybody. I don't really have to do much. Whenever he has the ball I just got to spot up and make some shots and got to get out in transition. But I think that's what he does well for our team, is take all the pressure off of everybody."


Bulls coach Tom Thibodeau understands how much Rose's presence means not only to his team, but to the city of Chicago. He reflected on the three years it has been since Rose's last performance before the game.


"Time does go by quickly," Thibodeau said. "So you're talking about a guy now who's sort of in the middle of his career. He's been through a lot, so I think early on, you're 22 years old, you're the MVP of the league and there weren't many bumps in the road. He's hit a few bumps and he's gotten through those. So I think that's a good thing for him; the fact that he was able to get through it, I think it's made him stronger. And hopefully he can build on that and we can take off from here."


The difference in Rose's game Saturday night, compared to his most recent performances, was that he was more aggressive to the rim. He drove to the hoop 13 times, almost double his average of 7.2 a game, according to ESPN Stats & Information. Fourteen of his 23 points came on drives, five more than what he averaged during the regular season.


The eerie part of his final Saturday night stat line was this: In his last postseason game in 2012, he also scored 23 points and the score was 103-91, as it was on Saturday night.


After a strong first showing, Rose and his team are looking forward to continuing to find their rhythm Monday night in Game 2. Rose knows he must take care of his body as he begins what the Bulls hope will be a long playoff push.


"[Sunday] is a recovery day," Rose said. "I'm not young anymore, so really take care of my body. Drink a lot of water, make sure I eat right and really, really make sure I stay off my feet. It's almost going to be like a back-to-back for me because it's like my fifth game back ... just trying to get the most out of every one of my days."

Rose discusses first playoff game in 2015
Derrick Rose talks about his mindset after the Bulls' 103-91 win over the Bucks in Game 1.