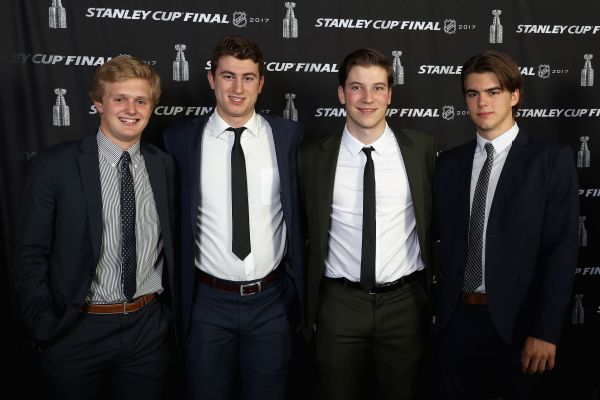 NEWARK, N.J. -- With the NHL draft a week away, the New Jersey Devils are still holding the No. 1 pick and getting ready to use it.

Executive vice president and general manager Ray Shero said the team has received a couple of calls from teams asking what it would take to get the top pick in next Friday's draft, but the choice still resides in New Jersey. Shero isn't shedding any light on whose name will be called if the Devils make the selection at the United Center in Chicago.

Most experts think it will be either center Nolan Patrick of Brandon of the WHL or center-forward Nico Hischier of Halifax of the QMJHL.

This will be the first time the Devils have had the top pick in the draft, and they need a good choice after missing the playoffs the past five seasons.

This has been a busy week for Shero. He has been finalizing his list of the Devils that he wants to protect in the expansion draft that will stock the roster of the Vegas Golden Knights -- and taking those calls.

"It's usually, 'Would you be interested in moving your pick, and what would it take?'" Shero said. "I'm not shopping the pick. Some teams have called and some teams say: 'Hey, here's what we would be thinking.' But put it this way: I still have the pick."

Shero laughs as the words come out of his mouth.

"If they are calling me, they are also calling someone else to see what the cost is," he said. "At this point, I have told our staff we have the pick at No. 1 and that's the direction we are going. If that changes, we'll prepare for that."

The Devils beat the odds in the draft lottery, probably posting their biggest win since going to the Stanley Cup Final in 2012. Despite having only an 8.5 percent chance of winning, they moved up four spots to the top of the lottery list.

There is seemingly no generational game-changer in this year's draft class.

"If it was Connor McDavidor Sidney Crosby or Auston Matthews, it might be different, obviously, or maybe McDavid and Crosby," Shero said. "Even with Auston Matthews, there was Patrik Laine, and Winnipeg took him [No.] 2."

"I think that is what we have here, at least in the top five," Shero said.

The Devils need a lot of help after posting a 28-40-14 mark, their worst record in nearly three decades. They need a goal scorer -- and more scoring, in general -- and a defenseman who can move the puck.

Shero has been transforming one of the oldest teams in the league to one that builds on speed and skating. He will have 11 picks in the draft, although he might use some to make some moves.