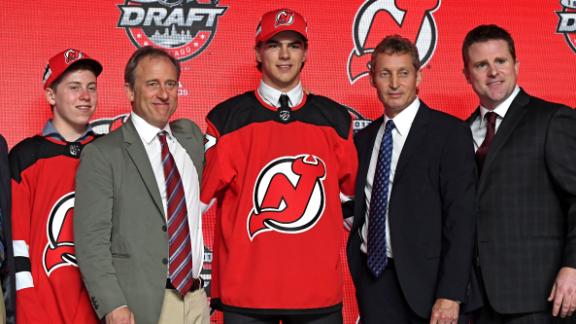 CHICAGO -- Cody Glass played in a youth hockey tournament in Las Vegas when he was 10. His Junior Steelers team finished a disappointing second.

He is looking forward to many more games in Sin City.

Glass was selected by the expansion Vegas Golden Knights with their first-ever pick Friday night, going No. 6 overall as part of a parade of forwards at the top of the NHL draft. The 18-year-old Canadian center had 32 goals and 62 assists in 69 games last season for the Portland Winterhawks of the Western Hockey League.

"I didn't really see that as a hockey place when I went there, but now, with the new team and the fans and season tickets sold out, I think hockey will be unbelievable," Glass said. "Just being there and walking down the Strip, it's something that's really nice. You don't see too much of that in Winnipeg."

The first NHL draft in Chicago began with another 18-year-old forward, with Swiss center Nico Hischier going No. 1 overall to the New Jersey Devils. The Philadelphia Flyers then grabbed Nolan Patrick at No. 2.

Ten of the top 13 picks were listed as centers. Defensemen Miro Heiskanen (No. 3 overall to Dallas) and Cale Makar (No. 4 to Colorado) and right wing Owen Tippett (No. 10 to Florida) were the lone exceptions. Vegas also opted for another forward prospect with its second of three picks in the first round, taking Nick Suzuki at No. 12 before selecting Swedish defenseman Erik Brannstrom with the 15th pick.

After a symphony of boos for NHL Commissioner Gary Bettman and most of Chicago's rivals across the league, the crowd cheered when the Blackhawks finally got on the clock at No. 26. But they promptly moved back three spots in a deal with Dallas in the first of three trades announced during the first round.

The crowd at the United Center cheered again when the Blackhawks got back on the clock, and general manager Stan Bowman played to the roaring fans when he brought out captain Jonathan Toews and star winger Patrick Kane to announce their selection of Finnish defenseman Henri Jokiharu.

"Jonathan Toews and Patrick Kane call my name, and it can't be a better feeling,'' Jokiharu said.

Hischier, 18, is the highest-drafted Swiss player in NHL history. He had 38 goals and 86 points in 57 games with the Halifax Mooseheads of the Quebec Major Junior Hockey League this past season. He spent the previous two seasons in the Swiss pro league, where he was coached by current Ottawa Senators coach Guy Boucher.

Hischier fits in nicely with general manager Ray Shero's desire to put a faster team on the ice. New Jersey is coming off its worst season in nearly three decades, finishing with a 28-40-14 record.

But Hischier is just over 6-foot and listed at 179 pounds, and will need to put on more muscle to succeed in the NHL.

The 18-year-old Patrick, a Winnipeg, Manitoba, native whose father, Steve, and uncle James played in the NHL, held the top spot in the NHL Central Scouting Department's final rankings in April. He sustained a sports hernia last summer that hampered him during his season with Brandon of the Western Hockey League, but he finished with 20 goals and 46 points in 33 games.

"Once we gathered all the information we felt comfortable that if he was there for us we were going to take him," general manager Ron Hextall said.

The New York Rangers and Tampa Bay Lightning also opted for players with family ties to the NHL. New York got the No. 7 pick in a trade with Arizona and selected center Lias Andersson, whose father Niklas played in the league. Callan Foote, who went to Tampa Bay at No. 14, is the son of two-time Stanley Cup champion Adam Foote.

"It's nice to have someone like him on my side," Callan Foote said.