Devils rally from 3 goals down, beat Golden Knights in OT 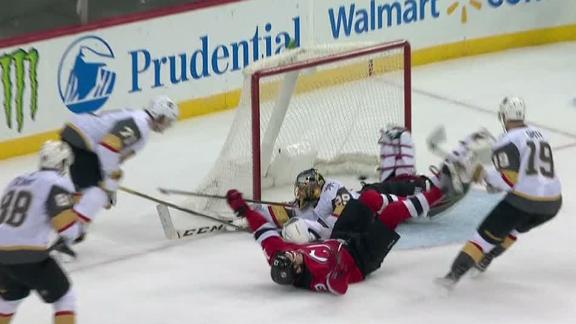 ESPN
NEWARK, N.J. -- The New Jersey Devils were tired of the pointed questions. Tired of the team meetings. Tired of not feeling like their work had accomplished a tangible result.

So they went out and did something about it.

Travis Zajac, Miles Wood, Kyle Palmieri and Brett Sevey also scored for the Devils, who trailed 3-0 after one period, and 4-1 in the second before rallying for their second win in five games.

Cory Schneider gave up three goals on seven shots over the first 9:22 before he was pulled. Keith Kinkaid came on finished with 14 saves.

"It's not easy for a goalie coming into a game," Hischier said of Kinkaid. "He did a great job and made some huge saves."

William Karlsson had two goals, and Alex Tuch and William Carrier also scored for Vegas, which lost for just the third time in their last 12 games. Marc-Andre Fleury had 37 saves and remained one win from tying Hall of Famer Tony Esposito for ninth all-time for goaltender wins.

"We played a real good first 10 minutes of the hockey game and that was it," Vegas coach Gerard Gallant said. "New Jersey took over after that. They played real well and real hard and battled back. We weren't prepared for that, I guess."

Zajac pulled the Devils to 3-1 with a power play goal at 2:59 of the second, but Karlsson's second of the game and 13th of the season 58 seconds later restored the Golden Knights' three-goal lead.

Wood got his third of the season with 9:39 left in the middle period to pull New Jersey back within two.

Palmieri's unassisted goal at 6:24 of the third made it 4-3 with his team leading 17th. Seney tied it with 5:05 left as a Vegas player kicked the puck into his own goal.

The Devils outshot the Golden Knights 42-22, including 30-12 after the first period.

"The end of the second was a huge part of the game," Boyle said. "Most aspects of our game was really good because we stuck with it."

Tuch got Vegas on the scoreboard first just 1:19 into the game. Karlsson doubled the lead at 7:45 and Carrier made it 3-0 less than two minutes later. That prompted Devils coach John Hynes to pull Schneider, who came in 0-5-1 with a 4.29 goals-against average in his previous eight games.

"We obviously have him here so this is what we think is best," Hynes said when asked if the Devils wanted Schneider to continue working with goaltending coach Roland Melanson, or if the organization would consider sending him to AHL Binghamton on a rehabilitation stint.

"Cory is a big part of our team. He's going through some things and right now we'll all continue to work through it."

Game notes
Dating back to Dec. 29, 2017, Schneider is 0-14-2, which is the fourth-worst in franchise history. William McKenzie holds the record with 26 consecutive decisions without a win, between Oct. 27, 1975, and March 15, 1978. He went 0-22-4 in that span. Former Capitals goaltender Michel Belhumeur holds the NHL record for most consecutive appearances without a win with 42, set between Oct. 19, 1974 and Nov. 1, 1975. Schneider is signed through 2021-22, and will earn $6 million in each of those seasons. ... Ninety minutes before the game, the Devils and Prudential Center hosted a ribbon cutting ceremony for the William Hill Sports Lounge. The Devils have a partnership with the sports book, as do the Golden Knights. ... Prior to the game, the Devils called up LW John Quenneville from AHL Binghamton, and placed RW Stefan Noesen on IR. ... New Jersey LW Taylor Hall missed the game due to "an injured lower body," according to the team. It was the first game the reigning Hart Trophy winner has not played this season. He left Thursday's practice early. ... Vegas LW Max Pacioretty missed the game with what the team termed "a minor injury." ... Vegas C Paul Stastny played in his first game since Oct. 8. He had missed 30 games with a lower body injury. ... The teams play once more this season, Jan. 6 in Las Vegas.

Golden Knights: At the New York Rangers on Sunday.

Devils: At Nashville on Saturday night.