Dirk: Mavs would 'love' to have Melo 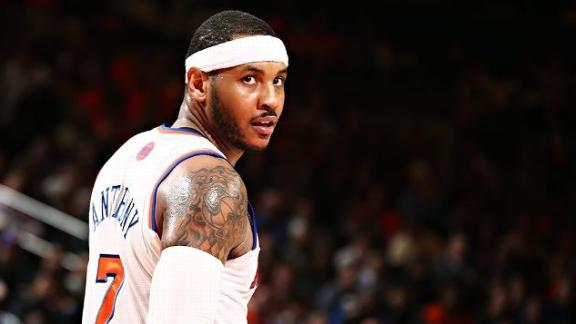 Mavericks star Dirk Nowitzki has made a public pitch to recruit Carmelo Anthony to Dallas.

"If Carmelo would really love to come here, we'd love to have him," Nowitzki said in an interview on 105.3 The Fan in Dallas.

Anthony is under contract for next season but is expected to opt out of the final season of his deal with the New York Knicks and test free agency this summer.

Knicks president Phil Jackson has stated publicly that he'd like Anthony to consider opting in to the final season on his contract and testing free agency next summer. He has talked to Anthony several times about opting in over the past month, sources told ESPN.com -- including as recently as Friday night in Los Angeles.

Anthony said publicly during the season that he planned to test free agency this summer. A league source said last Thursday that Anthony hadn't changed his mind and remained committed to testing free agency.

The Mavericks are expected to have enough cap space to offer Anthony a maximum contract this summer.

While Anthony has said he'd like to remain in New York, he's also expressed a desire to consistently compete for a championship.

The Knicks, who won just 37 games last season, aren't expected to have much cap space this summer to pursue free agents and don't have a pick in the 2014 draft. So it might be difficult -- barring a blockbuster trade -- for Jackson to significantly upgrade the roster this summer.

The Mavericks won 49 games last season and finished in eighth place in the Western Conference. They lost in the first round to the San Antonio Spurs in a seven-game series.

Dallas is projected to have as much as $30 million in cap space this summer.

Nowitzki, who led the Mavericks to an NBA title in 2011, said that he would have no problem coexisting with Anthony, the No. 2 scorer in the NBA last season.

"Listen, I think I've showed over my 16 years that I can play with anybody," Nowitzki said. "The only tough season I think we've had is when we had [Antawn] Jamison and Antoine Walker and myself who are all three kind of the same four-men, but other than that I think I've shown over my career that I can play with anybody. I'll adjust, whether I have to get out of the way or go to the corner more, post up, pass. I'll do whatever, really, that needs to be done out there to win or for this franchise to be a winner."

Nowitzki Voices Mavs Support To Land Melo
Ian Begley discusses whether the Dallas Mavericks would be a good destination for Carmelo Anthony.