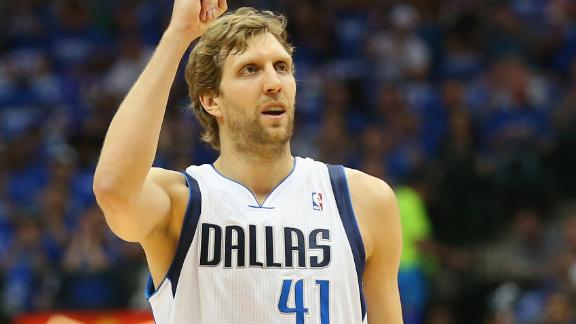 Dirk Nowitzki and the Dallas Mavericks have agreed to terms on a new three-year contract believed to be in the $30 million range, according to sources close to the situation.

The deal, sources said, contains a player option that would allow Nowitzki to return to free agency in the summer of 2016 and preserves the rare no-trade clause he had in his last contract.

Fresh off completing a four-year, $80 million contract in which he left some $16 million on the table, Nowitzki has agreed to take a far steeper pay cut this time in hopes of leaving enough salary-cap space for the Mavericks to sign top free-agent target Carmelo Anthony or multiple other contributors this summer.

Nowitzki's deal can't be made official until July 10, when a leaguewide moratorium on signings and trades is lifted and the official salary-cap and luxury-tax figures for the 2014-15 season are announced.

But Nowitzki was always the most likely big-name free agent to get a deal done quickly after the sides discussed the possibility of an extension last month that would have prevented the 36-year-old from even reaching free agency, much like Memphis did last week with Zach Randolph.

"Cubes (Mavs owner Mark Cuban) knows I don't want to go anywhere and he doesn't want me to go anywhere," Nowitzki recently told ESPN Dallas 103.3 FM. "We're guessing that will be over pretty quick and then we can focus on making this franchise even better.

"This deal is not going to be about squeezing out the last dollar. We'll just have to wait and see what the years and the final number is, but I'm sure it will be respectable for both sides."