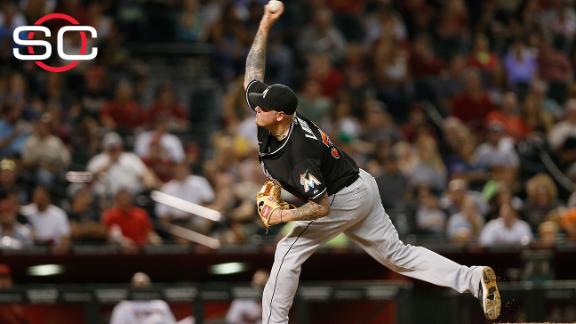 ATLANTA -- The first-place Los Angeles Dodgers have bolstered their pitching staff, acquiring Mat Latos from the Miami Marlins and Alex Wood, Jim Johnson and Luis Avilan from the Atlanta Braves in a 13-player deal.

Leading the NL West by a half-game, the Dodgers obtained Latos and Wood for their rotation. Johnson and Avilan add bullpen depth.

"To sit here right now having addressed our biggest needs in the rotation and bullpen and added future pieces while preserving our top guys in the system is a really good outcome," Dodgers president of baseball operations Andrew Friedman said. "But we came into it without any hard and fast rules and were open to a lot of different conversations. Things could have gone a different direction, but to have things shake out the way they did, we're really happy -- not only about 2015 but going into the winter and beyond."

Miami got three minor leaguers from the Dodgers and sent a draft pick to Atlanta.

Los Angeles will assume all of the remainder of both Latos' and Morse's salaries, according to reports. Latos is making $9.5 million this season and is scheduled to be a free agent in 2016, and Morse is in the first year of a two-year, $16 million contract.

Latos would provide Los Angeles with a veteran No. 3 starter behind All-Stars Clayton Kershaw and Zack Greinke and also should fortify a Dodgers rotation that has been ravaged by injuries.

Latos probably will pitch for the Dodgers on Sunday against the Los Angeles Angels. The Dodgers scouted his past eight starts, Friedman said, and they thought his stuff had returned to the level it was at when he was at times a dominant starter for the San Diego Padres.

"He's missing a lot of bats," Friedman said. "He commands the zone well, he can eat up a lot of innings and, obviously, he's going to be a free agent at the end of the year and highly motivated to pitch extremely well."

The Dodgers, who had little use for Morse given Adrian Gonzalez's presence at first base, a crowded outfield and Scott Van Slyke performing well in a bench role, designated Morse for assignment.

To make room on their 40-man roster for all the new players, the Dodgers also designated pitcher Brandon Beachy, outfielder Chris Heisey and reliever Chin-hui Tsao for assignment. They put reliever Chris Hatcher on the 60-day disabled list. He is recovering from a strained left oblique muscle.

Latos, 27, was traded to Miami by Cincinnati this past offseason and has gone 4-7 with a 4.48 ERA in 16 starts with the Marlins.

But he has posted a 2.96 ERA in seven starts since returning from the disabled list in early June and has been outstanding over his past three starts, with a 1.80 ERA over that stretch.

Olivera has impressed in the minors since signing a six-year, $62.5 million deal with Los Angeles this year, hitting a combined .348 with two homers and seven RBIs in 19 games at three different levels of the Dodgers' farm system.

John Hart, Atlanta's president of baseball operations, said the Braves think Olivera can be a Travis Fryman or Scott Rolen type offensively -- a .270 or .280 hitter with power.

They envision him batting somewhere in the Nos. 4-6 spots in the lineup and providing help for first baseman Freddie Freeman.

"We really like the player," Hart told reporters on a conference call Thursday. "We like the bat. We like the makeup. This is a guy we feel like is major-league ready who can come in and hit in the middle of the order.

"He's also versatile. He can play third. He can play first. He can play left. Look out into the market, and it's tough to find those bats. He's affordable for us, and we feel like this is going to give us the opportunity to do more things to build the club."

Information from The Associated Press, and ESPN's Mark Saxon and Jerry Crasnick was included in this report.