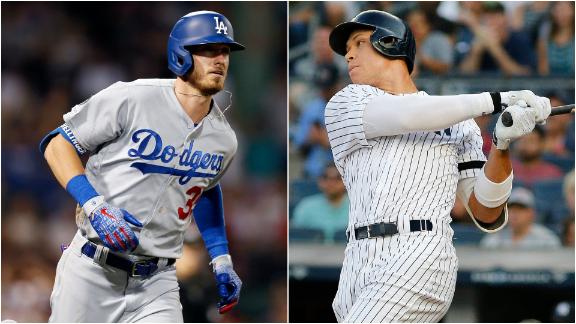 ESPN
The host Los Angeles Dodgers have the momentum, but the New York Yankees have the incentive when the two teams with the best records in baseball meet for the first time since 2016 in a three-game series that opens Friday night.

Left-handers Hyun-Jin Ryu (12-3, 1.64 ERA) of the Dodgers and James Paxton (9-6, 4.53) of the Yankees are slated to duel in a rare regular-season head-to-head matchup of franchises that have met 11 times in the World Series, with New York prevailing on eight of those occasions.

The Dodgers (85-44) have moved into the fast lane in their attempt to finish with the best record in the National League and thus clinch home-field advantage throughout the NL playoffs. They have won three in a row overall and five straight at home, the last two coming in walk-off fashion against the Toronto Blue Jays to open a comfortable eight-game cushion over the Atlanta Braves (77-52) for the NL's best record.

Max Muncy played a role in both thrilling finishes, ending it himself with a home run in the 10th inning on Wednesday night before drawing a leadoff walk to ignite a three-run uprising in the ninth on Thursday that was finished by an Enrique Hernandez game-ending single.

"I can't count how many big hits he's had for us," Dodgers manager Dave Roberts boasted of Muncy. "When we're at home, we feel if the game's tied, we have a good chance to finish it with a walk-off."

The National League leader in ERA, Ryu is coming off a rare subpar outing, taking the loss in a 4-3 defeat at Atlanta after allowing all four Braves runs in 5 2/3 innings.

He has faced the Yankees just once in his career, suffering the loss in a 6-4 defeat in New York as a rookie in 2013, allowing three runs in six innings, including a home run by Ichiro Suzuki.

The Dodgers and Yankees split four games that season, each going 1-1 at the other's site. That's the last time the clubs have met in Los Angeles.

The Dodgers took two of three in New York in their last head-to-head in 2016.

Ryu will be facing a team that's struggled offensively of late.

The Yankees (83-46) totaled just nine runs in three straight losses at Oakland to start a six-game trip. They've managed just 27 runs in their last seven games, five of which were losses.

The Yankees begin the series one game up on Houston (82-47) in the race for best record in the American League.

Manager Aaron Boone said this week that winning in Los Angeles would demonstrate that his club wouldn't necessarily need home-field advantage in order to have success in the postseason.

"Obviously, we play really, really well at home and it's a place that we feel like we have a real home-field advantage," he noted to reporters in Oakland. "But we also know we're capable on the road as well."

Like Ryu, Paxton has faced Friday's foe just once without any success. Pitching for Seattle, he got a no-decision at Dodger Stadium in 2015 in a 6-5 loss, allowing five runs, including a Yasiel Puig homer, in 6 1/3 innings.

The Dodgers, who rolled up 16 runs in their series-opening win over Toronto on Tuesday, has sandwiched that explosion with four games of three runs or fewer, losing consecutive games at Atlanta over the weekend, before late victories over the Blue Jays the past two games.