Does a potential World Series champ need a 'hot' ace? 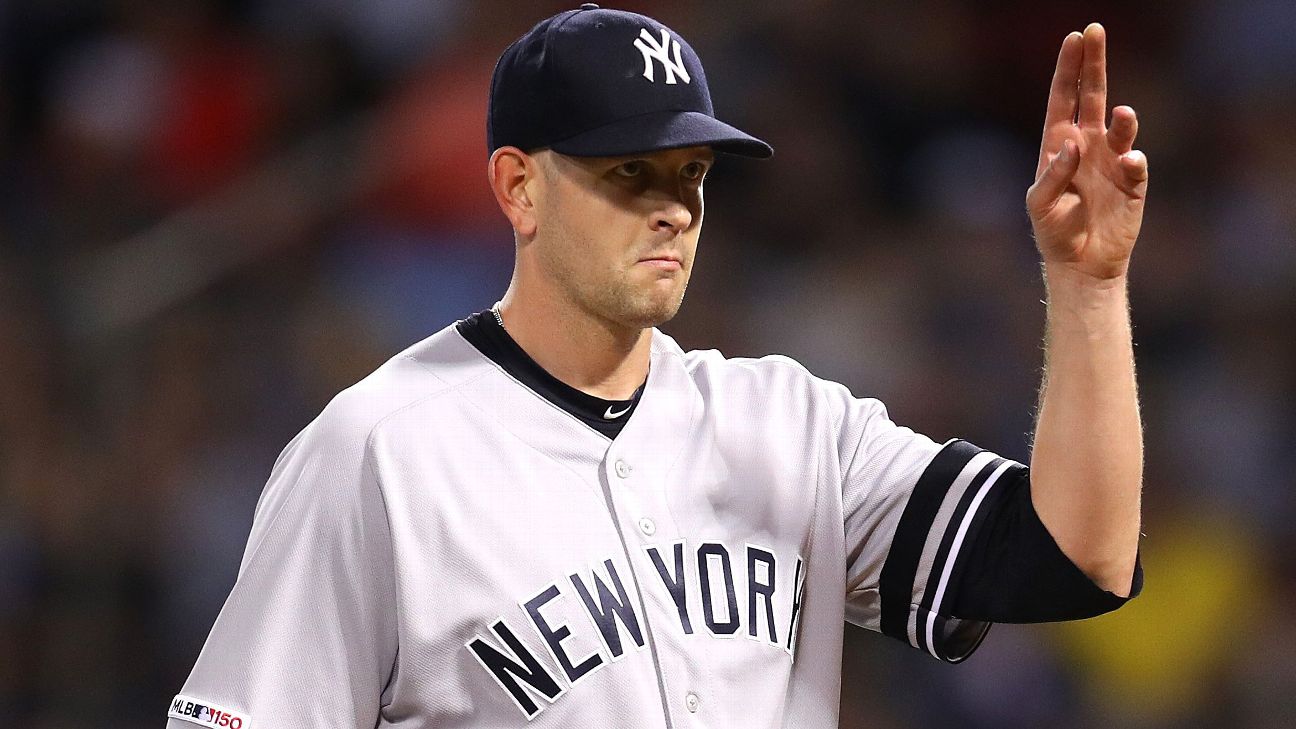 We had a small slate of games on Monday, but most of them had some playoff implications. Some thoughts ...

Item No. 1: James Paxton tosses another gem.Paxton allowed four hits in 6 scoreless innings as the Yankees blanked the Red Sox 5-0 in the teams' final meeting of 2019. David Ortiz threw out the ceremonial first pitch, but even that wasn't enough to lift the Red Sox, who fired president of baseball operations Dave Dombrowski on Sunday and look like they're ready to mail it in down the stretch. The Yankees dominated the season series, winning 14 of 19 games, which explains why the Red Sox were officially eliminated from the AL East race with the defeat and why Dombrowski was canned less than a year after he built a World Series champion. It was the most lopsided season series between the two rivals since the Yankees went 10-3 against the Red Sox in 1980.

The bigger result for the Yankees, however, was Paxton checking in with his second consecutive scoreless start after allowing one hit in seven innings against the Rangers. In his past eight starts, he's 8-0 with a 2.57 ERA and .170 batting average allowed. You have to think Paxton is pitching himself into that Game 1 start in the postseason over Masahiro Tanaka. Assuming Paxton stays hot in his final three or four starts, it will be an interesting decision for Aaron Boone. Do you go with Tanaka, who has playoff experience and has pitched well in October, or Paxton, who will be playing in his first postseason?

Anyway, I was curious to see if having a "hot" pitcher heading into the postseason is a key factor for the eventual World Series champ. This is more anecdotal than anything -- plenty of hot pitchers have played on teams that flamed out in the first round -- but let's check in on recent champs to see if they had a hot starter.

2018 Red Sox: Ace Chris Sale was slowed by injury, but David Price was 5-1 with a 2.68 ERA in his final nine starts. Price struggled in his first playoff start but turned it around and ended his postseason blues. (I still think he should have won World Series MVP honors.)

2017 Astros: Justin Verlander came over in an Aug. 31 deal and went 5-0 with a 1.06 ERA in five starts. He was then a huge factor in the playoffs, especially in the ALCS against the Yankees, when he allowed one run in 16 innings, including a complete-game win in Game 2.

2015 Royals: Kansas City's hottest starter was Yordano Ventura, who went 8-1 with a 3.26 ERA over the final two months. Ventura didn't have a great postseason, however, going 0-2 in five starts with a 6.43 ERA.

2014 Giants: Should we have seen Madison Bumgarner's historic postseason run coming? In his final 10 starts in August and September, he was 6-2 with a 2.12 ERA, with a meager .200/.230/.342 batting line allowed. He managed to do even better than that in October.

Can Paxton be the Yankees' version of Jon Lester or even last year's David Price? He certainly has the stuff, and when he's a roll, he's a tough customer. One thing worth noting: Of the pitchers mentioned above, all except Vogelsong had previous postseason experience. I always feel that is overrated, but maybe there is something to having pitched with that pressure. Game 1 of the division series is a long way from a regular-season start in Seattle -- that's for sure.

Item No. 2: Braves beat the Phillies 7-2. The Braves continue to play their best baseball of the season and have gone 18-3 in their past 21 games, moving just three games behind the Dodgers for the best record in the National League. Mike Foltynewicz had his best start of the season: 7 IP, 3 H, 1 R, 0 BB, 7 SO, 1 HR. He threw 71 of 102 pitches for strikes, with the Phillies' chase rate of 37.2% helping him. He got 12 swing-and-misses after getting 14 in his previous two starts combined (both against a bad Blue Jays lineup). That isn't a huge number of misses, but it suggests the stuff is there. Indeed, Foltynewicz hit 97 mph with his fastest pitch of the night and kept the Phillies guessing by throwing his curveball and slider for strikes and mixing in a two-seamer that induced eight ground ball outs on his 14 balls in play.

Bryce Harper and Rhys Hoskins are now both slugging under .500. They've hardly been the biggest problems for the Phillies this season, but considering that 54 qualified regulars are slugging over .500, it's disappointing that those two, playing in a bandbox, haven't fared better. For all the issues in the rotation and the injures in the bullpen, the Phillies expected more from the meat of their order. They've been good ... but not great.

Item No. 3: Astros take more batting practice. A day after beating the Mariners 21-1, the Astros clobbered the A's 15-0, scoring 11 runs in the first two innings and snapping Mike Fiers' streak of 21 starts in a row without a loss. He had gone 12-0 with a 2.59 ERA in that stretch. The Astros' plus-35 run differential in two games is the fourth-best in two games since 1900 and the best since the 1953 Red Sox went plus-36 on June 17 and 18. Those Red Sox posted 17-1 and 23-3 wins over the Tigers. Get this: In the second game, the Red Sox scored 17 runs in the seventh inning! Gene Stephens had three hits in the inning as the Red Sox had 14 hits and six walks (with only one home run).

I get the feeling that Alvarez is going to be one of the most important figures this October, the lefty slugger who helps balance a lineup that mostly hits right-handed. Oh, and in 99 PAs against southpaws, Alvarez has hit .291/.374/.628.

Item No. 4: Brewers beat Miami 8-3 as Trent Grisham goes 5-for-6. The Brewers remained two games behind the Cubs for the second wild card (tied with the Diamondbacks and a half-game ahead of the Phillies). FanGraphs gives the Brewers a 25% chance of making the playoffs, but here's a big reason you shouldn't ignore them: three more at Miami, three at St. Louis, three vs. San Diego, three vs. Pittsburgh and season-ending series at Cincinnati and Colorado. The Brewers have the easiest remaining schedule of the wild-card contenders. That's good news, but it also means fewer head-to-head games to make up ground. Still, the schedule gives the Brewers a chance.

Item No. 5: Pete Alonso mashes two more home runs and Jacob deGrom goes seven strong innings in a 3-1 win over the Diamondbacks. Given the standings -- the Mets would need to jump four teams to get the second wild card -- this game was more about Arizona losing than the Mets winning. Still, kudos to Alonso for his two home runs off Merrill Kelly, giving him 47 and a two-homer lead over Mike Trout for most in the majors and bringing him within five of Aaron Judge's rookie record. Judge, however, did not lead the majors in home runs (that was the year Giancarlo Stanton hit 59). The only rookies to lead the majors: Mark McGwire in 1987 (49, tied with Andre Dawson) and, of course, Tim Jordan in 1906 (tied with Harry Davis).

Item No. 6: What a debut for Cubs rookie Nico Hoerner.Hoerner became the first player from the 2018 draft class to reach the majors. With Javier Baez and Addison Russell both out, the Cubs called up Hoerner, who last played on Sept. 2 in Double-A, to fill in at shortstop. All he did was go 3-for-5 with a triple, two runs scored and four RBIs. 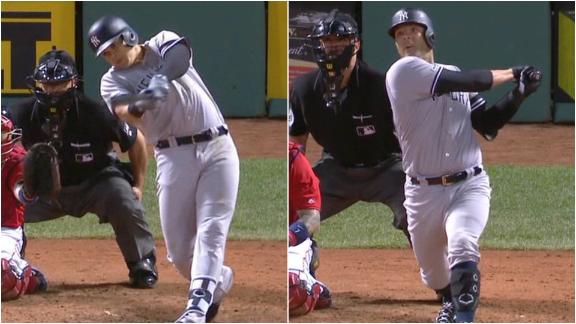 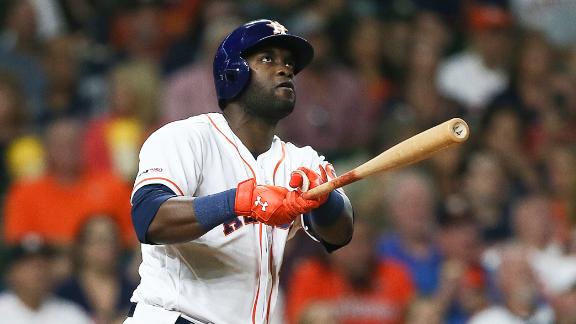