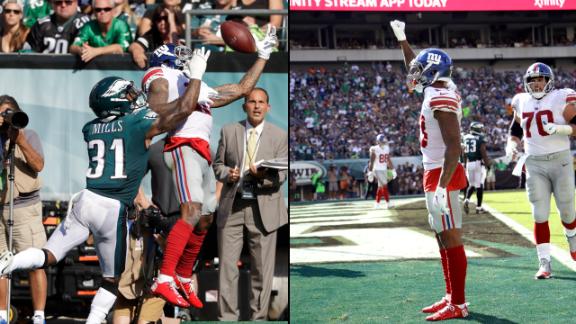 "I'm really not going to comment on that, but our players see it, our fans see it. It's one of those things I think you just kind of file away in the back of your mind, and you just remember those things and you move on," he said.

"It's unfortunate. I have to control our guys, obviously, and every other coach has to control their players. But it's something that, you don't want to see it, obviously, in the game. It takes away from a great play that he just made."

Following the first of two touchdowns Sunday in a Giants loss to the Eagles, Beckham Jr. appeared to walk like a dog and simulated urinating on the field, explaining afterward, "I'm a dog, so I acted like a dog. I don't know if the rulebook said you can't hike your leg."

He was flagged for unsportsmanlike conduct. The Giants were penalized 15 yards on the ensuing kickoff. The Eagles returned that kick to the 29-yard line.

"We should be talking about the way he played. He made some great plays in the ballgame yesterday, some tremendous plays, some game-changing plays. I'd rather be talking about that than the celebration penalty," he said. "I mean, it's real simple, I don't want to kick off from the 20-yard line. It doesn't help our team. It makes it tough on the players that are covering kicks and make an impact on field position."

Beckham scored again in the fourth quarter on a one-handed, acrobatic catch in the corner of the end zone, and afterward, he raised his fist in the air to celebrate, perhaps in reference to the player protests during the national anthem.

Pederson was asked whether Beckham's celebrations had anything to do with safety Malcolm Jenkins' aggressive pass-interference penalty on the receiver later in the game.

"It's possible, I think," he said, "but at the same time, it was a quick snap, and [cornerback] Jalen [Mills] was actually caught kind of off-guard at the time, and so [Beckham] was actually behind our defense, our secondary on that play, and Malcolm just knew that it was either going to be a big play, possibly a touchdown, or wasn't going to be a play at all, and so he felt at that time it was a good time to go ahead and have the interference call."

Beckham, for his part, didn't seem to think there was anything wrong with the dog TD celebration.