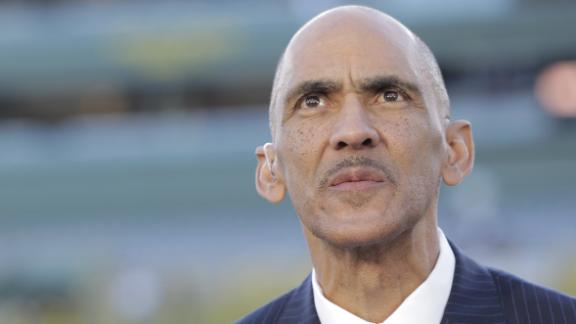 Tony Dungy sought Tuesday to clarify remarks he made regarding Michael Sam, saying the openly gay linebacker who was drafted by the St. Louis Rams "absolutely" deserves a chance to play in the NFL.

The former Tampa Bay Buccaneers and Indianapolis Colts coach said he would be concerned only with the distraction that media coverage of Sam's attempt to make the roster would create if he were his coach.

Dungy's comments to the Tampa Tribune for a story published Sunday created a backlash within traditional and social media. On Tuesday, in a statement released to media outlets, Dungy said he gave an "honest answer" to questions about Sam. Dungy said his comments were made to the newspaper several weeks ago, when "the Oprah Winfrey reality show that was going to chronicle Michael's first season had been announced."

The time frame of when Dungy made his remarks is in question. Tribune reporter Ira Kaufman told "The Dan Patrick Show" on Tuesday afternoon that he talked to Dungy "a week or two back." Also, Winfrey's planned documentary of Sam's rookie season was postponed in mid-May -- long before Dungy was interviewed by the Tribune, according to Kaufman.

"Thank God he wasn't the St. Louis Rams coach," Sam added. "I have a lot of respect for coach Dungy and like everyone in America, everyone is entitled to their own opinions."

In the Tribune interview, Dungy, who is an NFL analyst for NBC, said of Sam: "I wouldn't have taken him. Not because I don't believe Michael Sam should have a chance to play, but I wouldn't want to deal with all of it.

"It's not going to be totally smooth ... things will happen."

The remarks caused a stir for Dungy, who advocated for quarterback Michael Vick's return to the league after he was convicted in 2007 on dogfighting charges. Dungy became a mentor to Vick.

In his statement Tuesday, Dungy implied he should have been asked particular follow-up questions by Kaufman.

"I was not asked whether or not Michael Sam deserves an opportunity to play in the NFL. He absolutely does.

"I was not asked whether his sexual orientation should play a part in the evaluation process. It should not.

"I was not asked whether I would have a problem having Michael Sam on my team. I would not.

"I have been asked all of those questions several times in the last three months and have always answered them the same way -- by saying that playing in the NFL is, and should be, about merit," the statement read. "The best players make the team, and everyone should get the opportunity to prove whether they're good enough to play. That's my opinion as a coach.

"But those were not the questions I was asked. What I was asked about was my philosophy of drafting, a philosophy that was developed over the years, which was to minimize distractions for my teams.

"I wish Michael Sam nothing but the best in his quest to become a star in the NFL and I am confident he will get the opportunity to show what he can do on the field. My sincere hope is that we will be able to focus on his play and not on his sexual orientation."

Speaking on a conference call with the national media Tuesday to discuss his entry into the Hall, Brooks was asked about the Dungy comments. He prefaced his answer by saying he would reserve judgment because he hadn't spoken with Dungy.

"I just generally feel that he's probably saying what 31 other teams were probably thinking in that regard," Brooks said. "They didn't draft him, for whatever reason. He was just saying, if he were a head coach, this is how he would have approached the situation, or approached the player's situation."

Sam was selected in the seventh round by the Rams. He is scheduled to report to the team's training camp Tuesday and is expected to talk to reporters.

Olbermann: Tony Dungy Makes It Worse
Keith Olbermann deconstructs the contradictions of a Michael Sam clarification that clarified nothing.