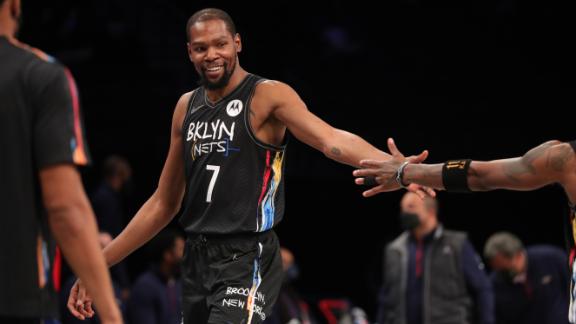 NEW YORK -- - Kevin Durant was perfect. The Brooklyn Nets were pretty close to it in the second quarter when he rejoined them.

Durant returned from a 23-game absence to spark Brooklyn's most explosive half of the season, finishing with 17 points on 5-for-5 shooting in the Nets' 139-111 rout of the New Orleans Pelicans on Wednesday night.


Durant came off the bench with about 7 1/2 minutes left in the second quarter and by the time the period ended the Nets had 79 points and a 20-point halftime lead. Brooklyn was a sizzling 14 for 18 (78%) in its 43-point quarter.

"I expected to come out here and play the way I played," Durant said. "I wasn't trying to ease into the game."

Durant added seven rebounds and five assists in 19 minutes in his return from a strained left hamstring. He was originally listed in the starting lineup, but was removed in a revised lineup distributed minutes before his first game since Feb. 13.

Coach Steve Nash said bringing Durant off the bench was so the Nets could more easily control his minutes if the game was close down the stretch.

"We got dominated at both ends of the floor. Totally dominated," Pelicans coach Stan Van Gundy said. "We couldn't get out to the 3-point line. Our defense was absurd. They totally dominated us."

Durant got an ovation from the first home crowd he'd played in front of with the Nets. Barclays Center only began allowing limited crowds on Feb. 23.

Eric Bledsoe scored 26 points for the Pelicans before being ejected in the third quarter.


Zion Williamson had just 16 on 4-for-12 shooting, ending his streak of 25 straight games with 20 points and 50% shooting. That tied Shaquille O'Neal for the longest such streak since 1954-55, when the shot clock debuted.

A night after surrendering 46 points in the third quarter of a loss to Atlanta, the Pelicans' defenseless period came sooner.

Brooklyn led 36-33 after Blake Griffin's long 3-pointer at the buzzer to end the first quarter. The lead had grown to 53-44 by the time Durant checked in and the rout was soon on.

The Nets shot 55% and made 19 3-pointers. They did it all without James Harden, who will miss at least 10 days with his own hamstring injury. He sat on the bench wearing shorts.

Brooklyn scored 36 more in the third, bringing a 115-82 lead to the fourth while Durant went back to the bench.

Nets: Griffin had 10 points, with a powerful dunk in the second quarter. ... The 79 points equaled the third-most for the Nets in a first half in franchise history.

Though the Nets have had their Big Three play just seven times, Van Gundy doesn't see much cause for concern for Nash.

"I mean, you're talking about three really, really talented guys who've played in a lot of big games and they know how to play the game and he's seen them all play," Van Gundy said. "I just can't imagine that it's a big problem. I mean, certainly he'd like to have them all together for as much time as he could, but I don't think he's probably over there real, real anxious about anything."

Durant played as a reserve for only the second time in his career - both in his last two home games. He wasn't able to start on Feb. 5 against Toronto in what was his 867th game while the NBA reviewed an inconclusive coronavirus test result of someone Durant had interacted with that afternoon. He was later cleared to enter, then forced to leave again in the third quarter.

Durant perfect from the field in return to court
Kevin Durant shoots a perfect 5-for-5 as he scores 17 points in his first game back from injury vs. the Pelicans.
Report a correction or typo
Related topics:
sportsespnnbabrooklyn netsnew orleans pelicans
Copyright © 2021 ESPN Internet Ventures. All rights reserved.
More Videos
From CNN Newsource affiliates
TOP STORIES