Dwyane Wade: Bulls putting too much pressure on Jimmy Butler 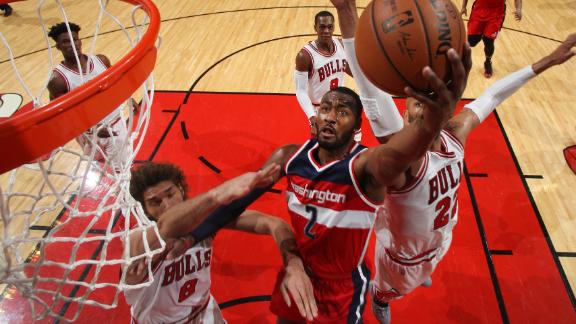 CHICAGO -- Dwyane Wade believes the Bulls are putting too much pressure on Jimmy Butler late in games.

Speaking after a 107-97 loss to the Washington Wizards on Wednesday -- a game that saw Butler shoot just 6-of-20 from the field -- Wade said the Bulls must be more versatile offensively in the final quarter.

"That's putting a lot of pressure on Jimmy," Wade said. "Let's just call it what it is. We put a lot of pressure on Jimmy in the fourth quarter to make a lot of plays because we're running just one action, so we got to get more action, more body movement. And it's got to come from us as players, too. Obviously, some of it's playcalling as well. Some of it's we got to get out of the way, we got to move. We got to keep them honest. We're asking the young guy to make every shot he takes with bodies in front of him, step-backs and all these things. That's not necessarily the easiest thing to do."

Overall, the Bulls hit just 7-for-24 over the final 12 minutes against the Wizards, who handed Chicago its seventh defeat in 10 games.

"I think so," Wade said when asked if the team's fourth-quarter offense is too predictable. "I think ideally we want to get to a point where we just want to move bodies, man. ... Offensively, we got to be able to move bodies. It doesn't matter if a guy knows who it's going to. If the paint is packed because you're running one action, then it's going to be tough. A guy's got to make an unbelievable shot."

Wade believes those numbers would improve if the Bulls were creating enough space on the floor to execute down the stretch.

"You have to take the shots you got to take," Wade said. "[The Wizards] did a good job. There's not a lot of spacing sometimes, so we had to take a lot of tough shots. Some nights you hit them. Some nights you don't. We have to figure out -- we have to continue to keep playing together, continue talking about our spacing so we can get better opportunities. But there's only so many options that you have on a basketball floor. I can't say guys are pressing. I'm sure a guy would love to have a shot back here or there, but shots are tough."

Butler seemed to agree with Wade's assessment while putting more pressure on himself in the wake of yet another loss.

"Maybe so," Butler said when apprised of Wade's statements. "I guess I got to be a better playmaker. Get the ball up early, watch it, see what I see. I'm going to still play basketball the way I know how to play basketball. Good, bad and indifferent, I think I play to win. So I guess we all got to be better, including myself."

The big issue for the Bulls is that after a quarter of the season, teams have scouted them enough to know the ball usually finds its way toward Wade and Butler. As a result, teams are throwing even more bodies at both players late in games.

"I think as the game goes along, teams are going to key in -- especially [on] myself and Dwyane Wade," Butler said. "Now we got to figure out ways to get other guys involved. We got to put other guys in great positions as well, but we're not guarding nobody, either. One [through] four quarters. I think sometimes they missed shots, so it looks good, but I always say there's a difference between missing shots and good defense. Sometimes we do play good defense. Sometimes teams just miss shots."

As it has throughout most of the season, Butler's frustration is centered on the fact that he feels the Bulls should be playing better defense.

"Fourth quarter's not the decision-maker," he said. "Yeah, it's important. But we were doing stuff wrong all game long to put ourself in the position, and then it just carried on over to the fourth quarter. So you can't really say the fourth quarter is that big of a problem because if we were doing everything we were supposed to be doing all night long for the other three quarters, we wouldn't be in that situation. That's the way that I look at it."

For his part, Wade said he and Bulls coach Fred Hoiberg continue to talk about how to get more offensive action going late in games.

"We always talk about different things," Wade said. "I thought today, especially early, we ran some great sets. We got to continue to work on our fourth-quarter execution. It's no secret at all. We stay in constant communication of what we can do. But it's just going to have to be some work in progress."