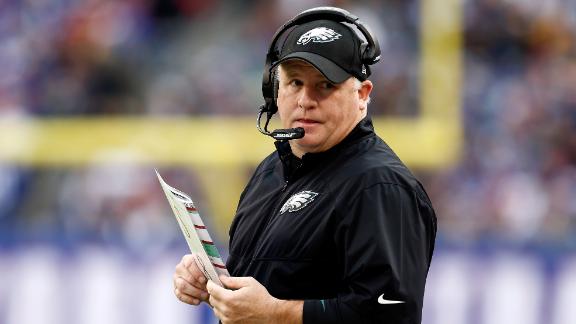 After a compelling offseason in which they traded for quarterback Sam Bradford, traded away running back LeSean McCoyand signed free-agent running back DeMarco Murrayand quarterbackTim Tebow, the dramatically revamped Chip Kelly-led Philadelphia Eagles will hit the road to open their 2014 regular season on ESPN's Monday Night Football against the Atlanta Falcons.

The Sept. 14 game will be followed by the Minnesota Vikings visiting the San Francisco 49ers later that night, as the ESPN doubleheader will also help introduce a national audience to two first-time head coaches -- Atlanta's Dan Quinn and San Francisco's Jim Tomsula.


Add in a Sept. 21 clash between the visiting New York Jets and Indianapolis Colts, with the Jets led by first-year coach Todd Bowles, and it will be an early look at three of the league's seven head-coaching hires in 2015.


Of course, there is no shortage of other compelling storylines from those first three games, such as whether running back Adrian Peterson will be playing for the Vikings, and cornerback Darrelle Revis -- back in his second tour of duty with the team and facing quarterback Andrew Luck -- potentially helps transform the Jets' defense.


Another notable highlight comes when Rex Ryan, in his first year as Buffalo Bills coach, leads his team into Foxborough, Massachusetts, against the defending champion New England Patriots on Nov. 23. It marks Buffalo's first Monday night game since 2009, and it is the Patriots' only Monday night game of the 2015 season.