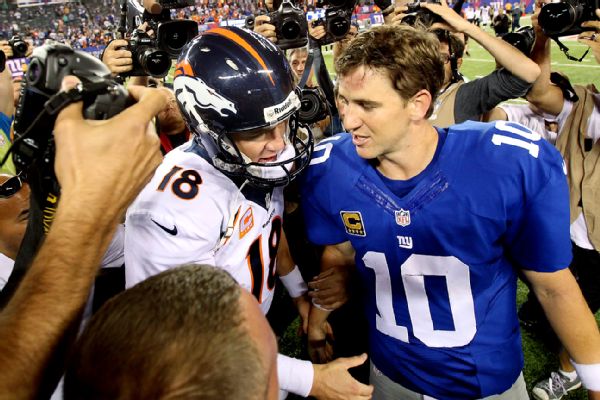 EAST RUTHERFORD, N.J. -- Peyton Manning could not help but talk a little football during his visit Tuesday to the New York Giants' facility. He even threw in a few tips in the quarterback meeting room for how the Giants can attack the Pittsburgh Steelers' defense this weekend.

As the Giants and quarterback Eli Manning began preparations for Sunday's matchup, Peyton Manning stopped by Quest Diagnostic Training Center and offered tips and talked with coaches, front-office personnel and even the team following its walk-through.

The visit might reap some benefits come this weekend.

"Yeah, he gave some insight," Eli Manning said of his brother's first visit to the team facility. "Just some stuff that was successful; he's played Pittsburgh a lot over the years. Played 'em last year in the playoffs. So [he] just had a few tips or ideas that may fit into our system."

Peyton Manning's Denver Broncos beat the Steelers 23-16 in last January's AFC divisional round. They went on to win the Super Bowl, after which Manning retired.

He still follows the NFL closely, especially when his younger brother and the Giants play.Eli Manning threw just eight touchdown passes in the first seven games for the Giants (8-3), but he has thrown 12 in the four games since the bye week.

"He'll watch and send me a text after games," Eli Manning said. "There are no tips. It's just more, 'Good throw on this.'

"We'll get into an exchange. He'll ask and he's watching it so, 'What play was that? What were you running?' But that, kind of, has always been the case. I think we still have great communication about what is going on."

When he was busy with his record-setting playing career, Peyton Manning didn't have the time to visit his brother during the season. Things have changed.

Now unaffiliated with another NFL team, he was even allowed to address the entire Giants team after practice Tuesday. It was the first time many of the current Giants met him.

His message: Cherish your time in the league.

"Don't take all these moments and time with the guys and all your friends for granted," rookie wide receiver Sterling Shepard said of the speech. "Just with your teammates and everything, cherish those moments because it's going to be over at some point."

Peyton Manning, 40, knows that firsthand. He's out of the game, but his presence is still felt.

"Big brother came in. Eli wasn't very talkative today," Shepard said with a smile. "I don't know why. I guess it was because big brother was in town."