Eli Manning: I 'deserve some criticism' after Giants' rough start 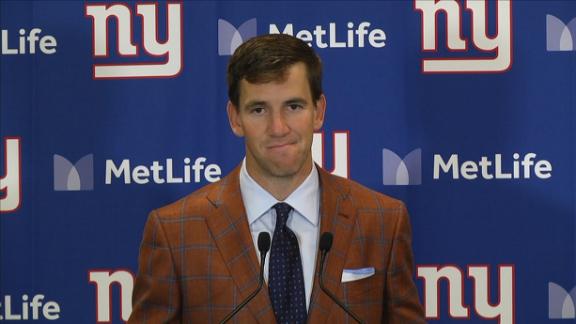 Manning, a 14-year veteran, has been around long enough to realize this is part of the deal as an NFL quarterback, especially in New York.

"Hey, you lose games, you only score 10 points, you deserve some criticism," Manning said during an interview on WFAN the day after the Giants' offense struggled for the second straight week. "Coach McAdoo knows I can handle it."

McAdoo was asked after the game what caused a costly delay-of-game penalty on fourth-and-goal from the 2-yard line in the third quarter. He answered honestly and bluntly after previously sidestepping questions about the performances of left tackle Ereck Flowers and wide receiver Brandon Marshall. Flowers allowed three sacks and Marshall dropped a key pass in the fourth quarter of a one-score game.

Manning is a two-time Super Bowl winner. He's the longest-tenured Giant, having playing in 201 consecutive regular-season games. He has admirably handled criticism before. This is par for the course.

McAdoo didn't seem to think he put the blame solely on his quarterback's shoulders. He noted the quarterback and center needed to get the snap off before the play clock expired.

McAdoo said he wasn't worried it would affect the locker room that he was critical of some players and not others. The second-year head coach has long said he treats all his players fairly by treating them all differently. That's his philosophy for handling the varied personalities.

Immediately after Monday night's loss McAdoo began his news conference by declaring the blame should be placed on his shoulders. The delay of game -- and lack of a timeout -- was later placed primarily on his quarterback.

McAdoo began his conference call Tuesday by saying "it's my responsibility" to make sure the team gets out of its own way and avoids the costly mistakes that plagued the Giants against the Lions.

While Manning took some blame after the game, Flowers appears to remain off-limits. Instead of being critical of Flowers' play the day after a rough outing, McAdoo was again complimentary of his young tackle.

When asked if Flowers would remain the team's left tackle moving forward, he didn't even flinch.