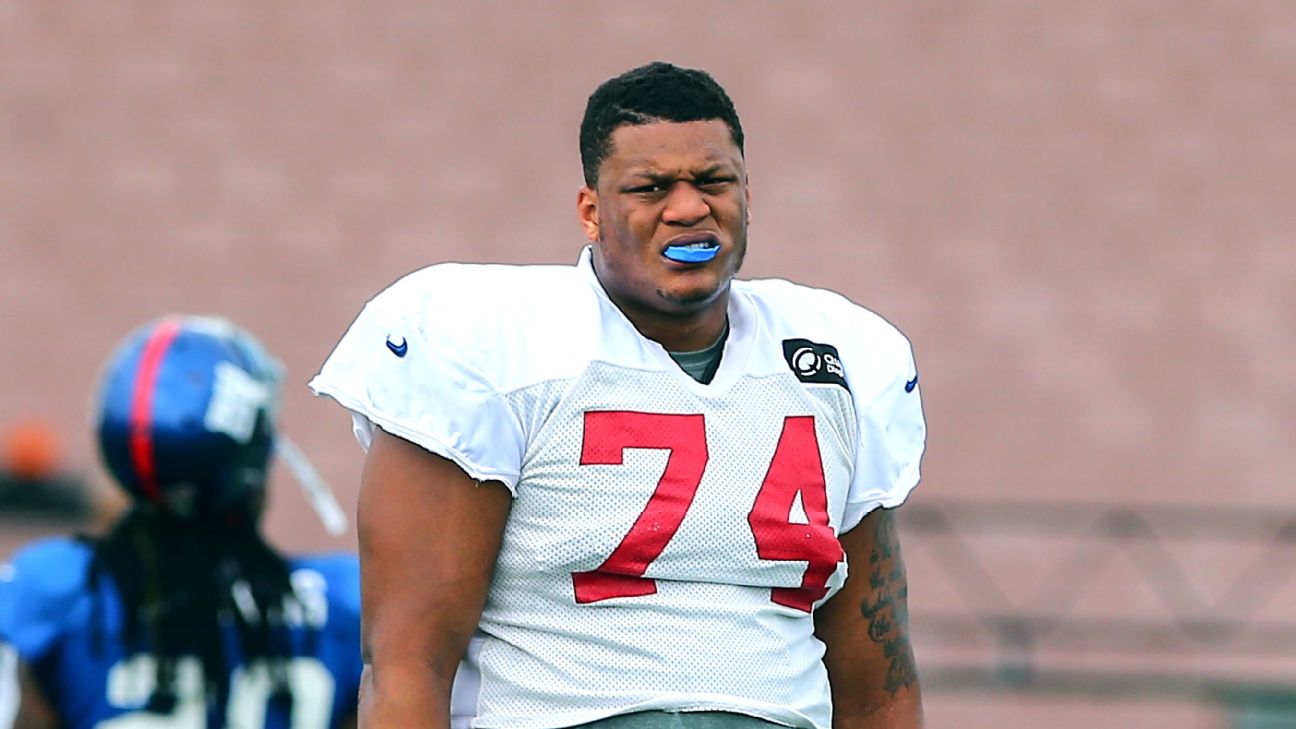 EAST RUTHERFORD, N.J. -- New York Giants offensive tackle Ereck Flowers admitted it was tough to get that phone call from coach Pat Shurmur earlier this offseason following the signing of Nate Solder to a record contract. Solder would be taking his position, and Flowers was being asked to move to right tackle, a position he only played sparingly early in his college career.

"Yeah, of course [it was tough]," Flowers said Wednesday in a rare interview session following Day 2 of mandatory minicamp. "But I love playing football so it's whatever now."

Flowers didn't attend the early parts of the Giants' offseason workout program. The team didn't seem all that pleased with the decision. He eventually hired agent Drew Rosenhaus earlier this spring and showed for the start of OTAs last month after the Giants declined the fifth-year option on his rookie contract earlier this offseason.

Flowers was the Giants' first-round pick (No. 9 overall) in the 2015 NFL draft. He started and struggled at left tackle each of his first three professional seasons.

New general manager Dave Gettleman has made a concerted effort to upgrade the offensive line. He started by adding guard Patrick Omameh and Solder. He drafted guard Will Hernandez in the second round. Flowers was later the subject of trade talks, especially around the draft. The Giants asked one team for a mid-round pick for Flowers, according to a source.

Flowers shrugged off the idea he was being dangled on the trading block this offseason.

"Any player can get traded," he said. "I didn't get traded. I'm still here. Haven't even thought about that."

The Giants threw Flowers right back into the first team upon his arrival. He has received positive reviews to date at right tackle.

"I see him improving and I see a guy that enjoys training and he has fit in well with the new players on the offensive line and he obviously has a relationship with the guys from a year ago," Shurmur said this week. "I know he's a tough guy and he's out there doing what we ask him to do and he's improving."

Flowers has experienced troubles in the past. He had run-ins with offensive line coach Pat Flaherty his rookie season and hasn't been a popular figure in the offensive line room since joining the Giants.

Flowers and Bobby Hart were considered outcasts. Some coaches and players believed Flowers and Hart gave up on last season early when they declared themselves unavailable for a Week 17 matchup with the Washington Redskins. Flowers was inactive for the contest and Hart was waived.

The Giants rebuilt their offensive line this offseason and concentrated on improving chemistry. They're hoping it leads to better results.

"It's very important to have chemistry on the field and off the field," Flowers said. "I thought the line last year got along, unless you know something I don't, you know what I mean. I didn't see that as a problem."

Flowers' time and attention now is spent on transitioning to the right side. He believes the adjustment is going well as he learns how to kick set pushing off his left foot instead of his right.

The hardest part is getting used to the muscle memory. Flowers has started all 46 of his career games at left tackle. But he understands the need to make the switch given his current predicament.

"At the end of the day they have to do what is best for the organization. I don't have any personal feelings about it," Flowers said. "For me, I want to prove myself every time I hit the field. I want to get better every year. Mainly I want to do it for myself. It's not to prove it to anybody else. I want to prove to myself that I can play at a certain level."
Report a correction or typo
Related topics:
sportsespnereck flowersnflnate soldernew york giants
Copyright © 2022 ESPN Internet Ventures. All rights reserved.
TOP STORIES
3 shot in Queens, including off-duty correction officer, police say
Bicyclist killed in hit and run; driver fled in another car with baby
2 Long Island beaches closed after lifeguard nipped by shark
2 dead, 2 seriously injured in Freehold crash
2 friends shot in cab on the way home from concert descibe incident
ESSENCE Festival makes triumphant return in New Orleans
Security incident at JFK Terminal 4 cleared
Show More
1 killed, several injured in shooting at mechanic shop in NYC
Thousands of dead anchovies wash ashore, fall from sky in California
3 dead, 3 critically wounded in Copenhagen shopping mall shooting
Where to watch 2022 Fourth of July fireworks
Macy's 4th of July Fireworks 2022: Everything to know
More TOP STORIES News