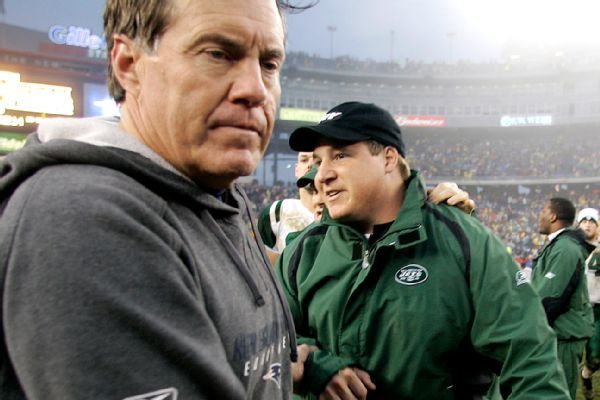 HARTFORD, Conn. -- Ten years after Spygate shattered his relationship with Bill Belichick, former New York Jets coach Eric Mangini hasn't given up on the possibility of reconciling with his once-close friend and mentor.

"Am I surprised? I hope it's something that can come back," Mangini told ESPN on Saturday at his alma mater, Bulkeley High School, where he conducted his annual youth football camp.

"Look, Bill is a big part of my life. Bill gave me a tremendous opportunity, and I enjoyed that experience, and I respect him. It's disappointing, the way it's been. Hopefully, it can change at some point."

Mangini left Belichick and the New England Patriots in 2006 to become the Jets' head coach, which strained their relationship. It was destroyed at the start of the 2007 season, when the Jets and Patriots met in New Jersey. Before the game, Mangini told Jets security to keep an eye on the Patriots' sideline, where they were illegally videotaping opponents' signals.

The Jets informed the NFL and, sure enough, the Patriots got busted during the game.

So began one of the biggest scandals in NFL history. Ultimately, Belichick was fined heavily and the Patriots were docked a first-round draft pick.

Mangini, portrayed in New England as a snitch, reiterated Saturday that he regrets the outcome.

Mangini, 46, got his start in the NFL under Belichick while with the Cleveland Browns. They coached together with the Jets and Patriots. They were so close that Belichick read at Mangini's wedding ceremony.

Currently out of coaching, Mangini said he admires the Patriots and still is friendly with members of Belichick's staff. In fact, offensive line coach Dante Scarnecchia was an instructor Saturday at Mangini's camp, which drew more than 700 high school-age kids and dozens of pro and college coaches.

"It's been fun watching Bill's kids," said Mangini, referring to Steven and Brian, both current members of the Patriots' staff. "I've known them for a long time. To see them play a role is nice."

"I thought Bill might have stopped," he said. "We always joked about it. He'd be like, 'Oh, I can only do this for X number of years,' and get out of it."

Mangini and Belichick haven't faced each other since 2010, when Mangini was the Browns' head coach. Since then, Belichick hasn't spoken publicly about his former assistant.