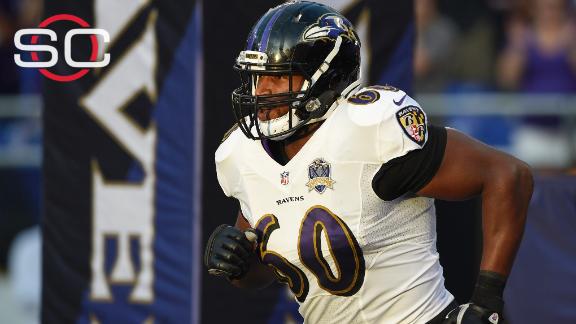 Monroe, 29, was released by the Baltimore Ravens in June. Anoutspoken supporter of medical marijuana, he told The New York Times after his release that he wondered whether his advocacy contributed to his release.

Monroe plans to discuss his reasons for retiring in the Players' Tribune on Thursday, according to NFL Network.

The only active player to publicly support taking marijuana off the NFL's banned substances list, Monroe said in a statement last month that he had no plans to end his campaign.

"Despite the current uncertainties, one thing is for sure: whatever happens in terms of my professional football career, I will never stop pushing for the League to accept medical cannabis as a viable option for pain management," he said.

The New York Giants reportedly showed interest in Monroe, as did a few other teams, but Monroe said he wasn't going to make a quick decision.

"This is very new. I've been released and it's been just a short amount of time since that's happened, so I'm weighing my options right now," Monroe told Bruce Murray and Brady Quinn on the Sirius XM Blitz in June. "I don't feel like I have to jump on one of the first opportunities that come up. And I'm just trying to be patient, wait on the right opportunity and also just decide what's going to be the best move for my family. I have a wife and three children, so there's a lot more at stake than just jumping on a deal."