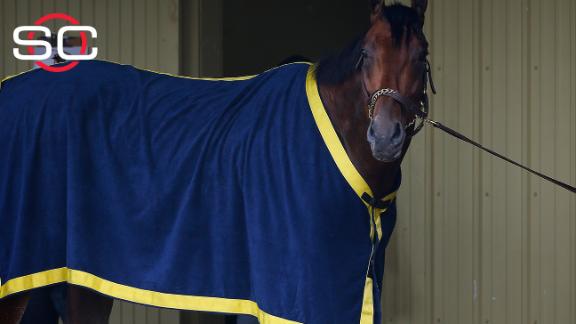 It is the appeal of the jigsaw, the mystery and the riddle that drew Paul Lo Duca to trying to pick the best pitches and pitch locations with which to get Albert Pujols out.

And it is the same appeal that draws the former major league catcher to try to pick horse-racing winners on a national stage.

"It's like figuring out a puzzle," said Lo Duca, who now mans the mike as one of the sport's top handicappers, working for TVG, a network devoted to horse racing available on select cable packages, as well as DirectTV (Channel 602) and the DISH Network (Channel 399). "You're trying to figure out which guy is going to be in front, which horse is going to be behind him. This horse might be able to come from behind.

"When Pujols would come up third in an inning, we'd plan to go after him with two outs and nobody on, but if there's a guy on second, who's up in the bullpen [who can get him out]? Figuring out a horse race is similar to that."

He has been with TVG since 2009 and that was his biggest moment of fame, a feeling that ranks alongside signing his contract at a Denny's after being drafted in the 25th round in 1993 ("My mom looked me in the face and said, 'The ball is in your court now.' "); going 6-for-6 in a game with the Dodgers; a diving catch he made by the dugout that ranked as one of the best defensive plays made by a catcher in recent memory; hitting a home run in his first at-bat with the Marlins after team owner Jeffrey Loria picked him up at the airport ("the most surreal moment ever"); and clinching the NL East title at Shea Stadium with the Mets in 2006 ("Everyone in the stands that night felt like family").

Lo Duca, a Brooklyn native who has dabbled in racehorse owning as well, hasn't been as fortunate in the big races this year (he had Upstart in the Derby and Dortmund in the Preakness), but much like baseball, when you partake in this enterprise, you know you're not going to win them all. If you win at a higher rate than most, you're going to be rewarded.

So how does someone like Lo Duca go about assessing the Belmont?

Handicappers will typically look at past performances and splits, and how a trainer fares at the Belmont (American Pharoah's trainer, Bob Baffert, has come up short there in Triple Crown bids with Silver Charm, Real Quiet and War Emblem).

"I am a numbers guy, but when it comes to this, you have to throw the numbers out the window," Lo Duca said. "Because every horse [going for] the Triple Crown was best on the numbers."

Instead, he'll keep the numbers in mind, but make decisions based on what his eyes tell him in the moment, akin to how he would handle pitching to Pujols.

Lo Duca will look at how each horse is carrying his weight in his workout, and will carefully study body language to see if he can glean any clues in making his pick.

He does like American Pharoah, a 3-5 favorite, but it's a cautious and careful appreciation.

"Bob said this horse was something special," Lo Duca said. "There are clockers out here who compare this horse to [Triple Crown winner] Seattle Slew. He can move so effortlessly.

"You have to give Bob Baffert credit. He gets the best of the best horses, but he keeps his stable compact. He's won the [equivalent of the] World Series multiple times. He's just been a little unfortunate [with his Triple Crown bids].

"American Pharoah is racing five times in eight weeks. He was late because of the [left front foot] injury [last October]. It will be interesting to see how he looks."

LoDuca is hopeful that this will be a turning point in horse racing's current perception.

"I think this race will get a lot of publicity. Maybe it will put horse racing back on the map. Back-to-back chances at the Triple Crown, even if he doesn't do it, it's helping horse racing. It's all coming together."

Lo Duca didn't give any indications as to which horse he would pick. But he does think this will be a Triple Crown bid to remember as he tries to put the final piece of the puzzle into its proper place.