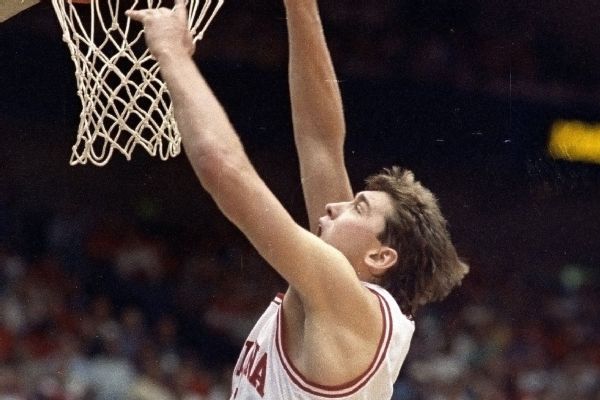 Former Indianabasketball player Todd Jadlow told ESPN he did not intend to demean Hall of Fame coach Bob Knight when he wrote in a recently released book about physical and emotional abuse his teammates endured under Knight in the late 1980s.

The personal memoir "Jadlow: On The Rebound" recounts Jadlow's life as a member of the Hoosiers' national championship team in 1987, as well as his struggles with drug and alcohol addiction, depression and ultimately prison in the years after.

Jadlow, who played for the Hoosiers from 1985 to '89, co-wrote the book with journalist Tom Brew. Jadlow also discussed his experiences in an interview with local Indianapolis television station WTHR earlier Tuesday.

"I wrote this book to be honest about my life,'' Jadlow told ESPN in a phone interview from his home in Kansas City, Missouri, on Tuesday night. "I didn't go into it to demean Coach Knight or put him down. I was just telling stories when I was at IU. It's not like I had a vendetta. I still have a lot of respect for him and look at him as a father figure. I didn't do this to tarnish him. I went through my own struggles, but these things happened at Indiana. I will let people who read this book and consider if it's abuse or torment by today's standards. If things went on today like they did, then you would be in jail.''

Jadlow rattled off a few instances from his past that he said are in his book, such as Knight punching him in the back of his head with a closed fist during a walk-through prior to an NCAA tournament game against Seton Hall;Knight grabbing him so hard that he had bruise marks on his side; and Knight squeezing him in his groin during a timeout. Jadlow said these incidents happened in 1989.

UCLA coach Steve Alford, who was at Indiana from 1983 to '87 and played two seasons with Jadlow two years prior to these aforementioned incidents, told ESPN in a text message on Tuesday night, "None of that ever happened while I was at IU -- NONE.''

Jadlow said he was giving an "honest account of what it's like to play under Coach Knight. When we won, it was country club. When we lost, it was pure hell.''

Jadlow said Indiana administrators watched all the practices and accepted it. He said today's standards wouldn't have allowed it to occur.

WTHR reporter Bob Kravitz wrote Tuesday that he reached out to Knight and those close to him to respond to Jadlow's claims, but Knight wasn't interested in giving a comment.

Knight, who coached the Hoosiers for 29 seasons, was fired after Indiana president Myles Brand cited, in part, an "unacceptable pattern of behavior" by Knight.

Knight went on to coach at Texas Techfor seven seasons and later worked as a college basketball analyst for ESPN.

Jadlow said he has received support from former teammates and alumni since the story broke but also has been criticized for coming forward with his claims.

Jadlow said his life bottomed out when he was driving over 100 mph with his then-2-year-old daughter in the backseat. Jadlow's low points also included drug use and trafficking in South America and a number of DUIs.

Jadlow ultimately served a year in jail, as well as another six months of work release and halfway house programs during a probationary period. Jadlow, now 50, travels the country sharing his story with high school and college students, he said, "hoping to prevent them following the path that I did.''

Jadlow said he tried to interview Knight for his book but was not able to get a response. He said he was once close with Knight's son, Pat Knight.